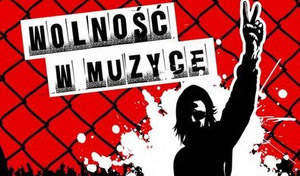 Communism, protests and martial law – those terms describe 80′ in Poland. People were feeling frustrated and helpless by the political regime. In consequence music stage in Poland experienced the big BOOM. Shout of rebellion was getting louder and louder and protest bands rose up!

No freedom of speech

Censure was controlling all the lyrics but artists were tricky and everyone understood well what they are talking about. Very important, symbolic meaning had festival of alternative music in Jarocin, which started in 1980. Concerts were the only moments, when young people could really feel free. Shout of the rock music woke up! Separation from the polite mainstream music called regime music became significant.

During the martial law bands which used to be forbidden started to be allowed in the radio. By reason of the fact that government was trying to make young people staying far from politics and protests. In effect, alternative music goes over control of the system, explodes and gives unique power in the communist bloc. Rock music becomes anthem of rebellious youth furthermore, an important element of their life in those hard as well as very sad period. Music is like expression for freedom of speech along with fight for dignity.

The band Republika in the song “Biała flaga” (White Flag), which is clearly hysteric protest song. Grzegorz Ciechowski (vocal) asks “Where are my friends?”  from “Solidarność”  – polish Trade Union, which was anti-bureaucratic social movement. Song is all full of metaphor and text to decode. Listen it below with English subtitles.

Bands such as Lady Pank or Perfect were legends of polish rock music at these times. Lady Pank was an opponent of the political system using a lot of hidden text in their songs. The singer of Perfect Grzegorz Markowski said, that “concerts on that time were more like a manifestation or spectacle for freedom”. The song “Chcemy byś sobą” (We want to be ourselves) was strong play with words.

Lombard with the great song “Szklana pogoda” (glassy weather) was another interpretation of the daily life in Poland. Saying about the life in the block of flats made out of concrete, watching TV where politicians proclaim serious speeches. She even sneers out of that in the video clip.

Punk rock band with a strong and pointed message was Dezerter. Masterpiece in irony in the song “Spytaj Milicjanta” – “ask the policeman, he will tell you the truth, he will show you the way” was accepted by censure.

Maanam – the band was invited to play at the congress of leaders of the communist parties of the Eastern bloc countries. They bravely refused and got banned for some time. Kora – vocal – was even wearing dark sunglasses on the concerts, same as gen. Jaruzelski – person which was responsible for the imposition of the martial law.

Those are just few examples of most important songs and bands. There are many more protest bands which struggled with the system, yelled for freedom and made a change in the hearts of young generation. If you are interested to explore more, I recommend watching film “Beats of Freedom – Zew wolności“. Film depicts history of rock music in Poland and its power in facing political regime. The movie is rich in archival photographs, among others, of Jarocin festival. Available also in English version.

32 thoughts on “Protest Bands in Poland – Yell for freedom”