Visas to Iran are easier to get year by year. Mine I got in Trabzon (Turkey), which was not a big deal. I went to consulate to apply and after few hours visa was ready. I was hitch-hiking with another polish girl through Georgia and Armenia visiting on the way to finally reach Iran (border between Armenia and Turkey is closed). 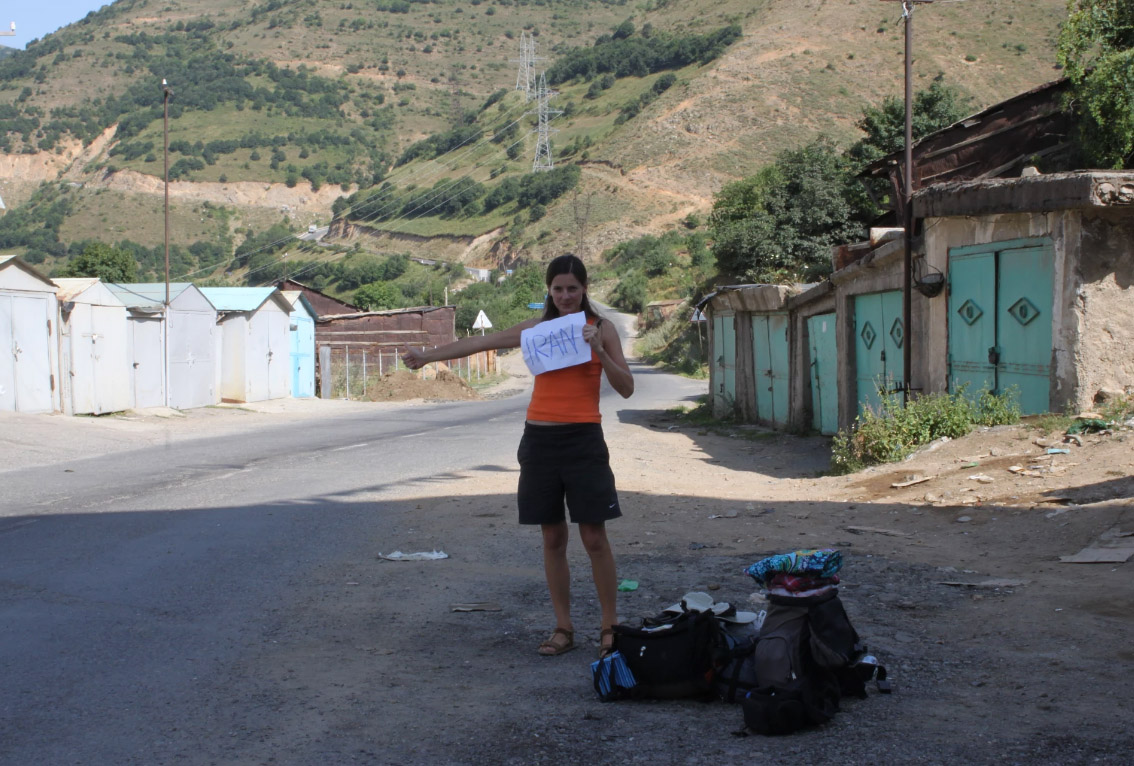 Crossing the border and hitch-hiking

On the border we were thought to be a dangerous spies and stopped for 2 hours, but finally we got in. Of course even though climate was not changing (still around 35 degrees) we had to dress well entering new country. Long pants/skirt, long sleeves and scarf are obligatory for all girls in Iran, no matter if they are local or tourists. We were just starting to hitch-hike and then Iranian guys called us to give us a lift. Great! Feeling so hot in the car, not used to wear autumn clothes on summer we took our scarf off. Guys were fine with that (they just came from Armenia, so have seen “naked” girls before). However, they asked us to put the scarf on when we were crossing various police checking points.

First destination was Tabriz – city in the northern Iran. Drivers dropped us to meet our host from couch surfing (CS is illegal in Iran but working very well). Ali, that was his name, unexpectedly arrived in elegant suit and when taking us to his car said: “We are going for a party now!”. We were thinking: PARTY?!!!?! After whole day hitch-hiking through Armenia, crossing borders and wearing hot pajamas we were very tired and stinky, not willing so much to go to party, but there was no choice.

I forgot to mention my clothes: long skirt with flower pattern, borrowed shirt from a Turkish boy (my long sleeves clothes were too tight to fit Iranian standards) and full of patterns scarf. People on the border asked me if I am a Gypsy when they saw my outfit.

And here we are entering the party in those pajamas! From a random street, we went down via narrow dark stairs to see an enormous hall with 400 pairs of eyes looking at us! 200 men in black sitting on the left along the tables and 200 of women in black on the right. Ali said to follow him and we got followed by hundreds of eyes going all the way between them. Oh Lord how we felt! We started to laugh from all this situation, going like Hollywood stars to pick the Oscar. HOT! HOT! HOT! We sat on the other table and still someone was coming to watch our faces.

We learned that it is “party” for parents of Ali, which came back from pilgrim to Mecca (very important for Muslims) and invited, as he said, “the closest family” – 400 people. Hosts gave us food – around 0,5 kg of rice per person and chicken. I couldn’t manage this damn scarf still falling down making me sweating even more. Unfortunately, we started to eat when people were praying… we realized too late. Anyway, it is not over of the shame of the year.

Shame of the year

After the official part, when people slowly started to leave, Ali took my camera and started to make pictures of his family standing on the special stage. Everyone wanted to get an honor having pictures with blessed in Mecca, we got one as well (so you can see me looking as a Gypsy). Then Ali asked me to replace him and take some pictures for him and his family, so I did. One pic, two, I said OK! They are still standing so three, four, they keep posing, so I showed my thumb to say “it’s OK”, but seeing their faces I recalled that thumb which we show for “like” means in Iran FUCK YOU! Same as middle finger in the western world. OMG! Shame went double or even triple…

Thanks to Ali, which laughing explained it kindly to his family so that they didn’t want to kill me anymore. After this I felt it is really enough and we must go to sleep. Fortunately Ali told us that party is over and we can go. Outside of the venue, he put our backpacks to the trunk of his sisters’ car and asked us to get in and wait for her to drives us to their home. One minute later around 7 people came and they also wanted to go with the same car. Finally, Ali said that his parents house is too full tonight because of many guests, so we have to go to his grandmother house, by his motor bike… What else is going to happen this night? – I asked myself.

What else can happen?

We hop on his old motor bike, we were going 3 of us (which is totally normal in Iran, but not for us, my friend on the back seat was almost falling). Of course what happens when you go by bike? The scarf is falling… My friend asked me if I hold my scarf and I said “No way! I better hold myself not to fall!”. After a short while we heard strong horns of the cars following us and people shouting something in Farsi. One of them was car of Ali’s sister with 7 people inside (also normal amount on Iranian roads) yelling that we have to cover our heads! GOD! People! I am falling from the bike! No, it is not important. Important is to hold the scarf!

After barely surviving this ride we arrived to grandma’s house seeing 10 women in chadoors in front of it. Again we were feeling like a colorful parrot in the ZOO. We got in and Ali said, he will bring our backpacks, which went in the car to his house. He left us with grandma which didn’t speak any English, however, showed us that we can take off the scarfs, because we looked too confused how to behave.

She brought us cups of tea and I thought nothing else is going to surprise me this evening and started to sip the tea and relax. Here I was wrong. Grandma came quickly saying something loud and showed us how to drink tea properly. She poured tea from the cup to its plate, took the sugar cube to her mouth and started to drink tea from the plate… so that it is not that hot… I had enough and I died…

I didn’t have energy for anything else than going to sleep (of course on the carpet – most people didn’t use beds in Iran). I couldn’t imagine how am I going to continue traveling in Iran. Even more, I didn’t care to wait for Ali to bring our bags to wash myself after this long day. Stinky, sweaty and sticky. Just sleeeeeep.

11 thoughts on “How I Barely Survived First day in Iran”