Well well well… Are you ready for Islamic melody with squeaking voices? Naaah this is absolutely not what I am going to propose, when taking into consideration music from Turkey.

I would like to present modern music, which is more pleasant for ear, than traditional instruments (which doesn’t mean I am going to play Tarkan). Please note, that what I recommend is truly alternative stage, accordingly it is nothing of what you hear on Turkish street or popular radio. 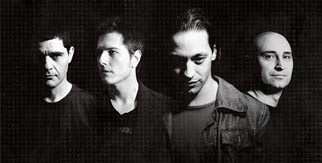 AND THE WINNER IS:

Duman means in Turkish “smoke” – the name came from the first song inspired by Pearl Jam and Nirvana – Halimiz Duman – song below. AMAZING! Briefly, it is a rock band, which is considered as the rock legend and in consequence became inspiration for many new coming groups in Turkey. The reason for that? Modern rock sound going farther from Anatolian rock (type combining rock and traditional Turkish folk) creating its own unique grunge style.

Band was found in Istanbul in 1999 including charismatic singer Kaan Tangoze, Batuhan Mutlugil on lead guitar and backing vocals and Ari Barokas on bass guitar and backing vocals as well. Later, Cengiz Baysal  joined the group as their drummer. Group is strongly influenced by singer/guitarist Kaan, which lived in Seattle and mentioned that time spent in US gave him new point of view on his country heritage as well as music. He o­­­­­­ften changes dramatically from slow part of the song to energetic chorus. I find his voice little bit spooky, like he is always stoned. Who knows, maybe this is how the name of the band was really created…

Truly deserves discovery by rock fans! There is some inexplicable magic in their creativity which is totally mesmerizing. Songs are mostly slow and melancholic, although enjoyable not only if you know Turkish. I prefer the ones which are more dynamic though. For instance song “Bu aksam” (tonight) with repetitive text saying: “I am gonna drink tonight!” is well-known by all young Turks! By the way it’s the only one I know by heart. Duman has over 10 albums on the account so far. Moreover, they composed a song “Eyvallah” supporting May 2013 Taksim Gezi Park protests, which was very significant and became quickly popular.

19 thoughts on “The legend of Turkish Rock”