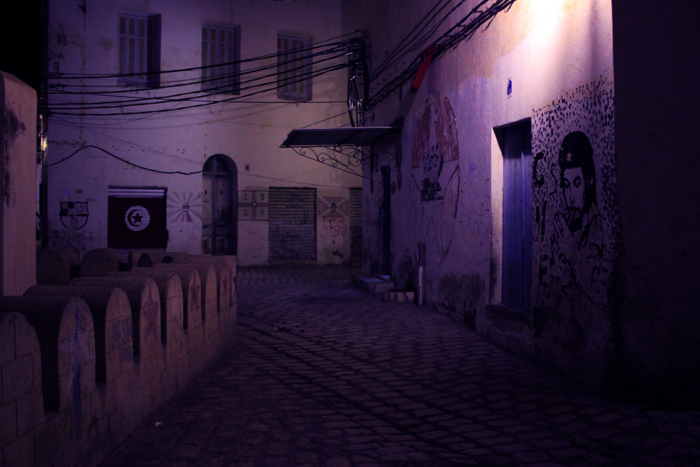 Tunisian alternative music started to emerge in the late 90′, during the regime of Zine El Abidine Ben Ali. Excluded, because government considered it as “politically incorrect” and intrusive.

Far from the beaten tracks of mainstream music broadcasts on radio, the Tunisian music has developed alternative scene coming from a denouncing and anti-conformist underground. Conservative and religious government and society could not accept it. Artists had a long and difficult way to be heard, struggled to find their audience. Inspired on western culture, France, as a former colony they were trying to add a bit from their own culture and heritage. Lots of bands rooted their rhythm in African music, or Berber ethnic group as their ancestry. Even though it was prohibited in media, artists found a way to perform through social media or on the streets

In 2011 The Jasmine Revolution started. Tunisian people asked for freedom and the youth wanted their rights. After a month of demonstrations, the fall of the Ben Ali regime marked a change in Tunisia. Music moved into another dimension and the alternative Tunisian scene, known for its engaging revolutionary texts, took center stage.

First, I would like to mention reggae bands because they are absolutely original. Thinking about Jamaican reggae? Not at all! In fact, they combine reggae roots with their traditional music. Results sound totally awesome! Besides the music, reggae bands had huge contribution in the revolution events, since represented freedom of speech and were voice of the young generation.

One of the pioneers of the Tunisian underground scene founded by Halim Yousfi (guitar, vocals), Wissem Ziadi (violin, choir) and Malek Halim (percussion, choir). The three friends created the band in 2006, and started a series of concerts in Tunis and Brussels. Their musical style is connection of reggae, afrobeat, funk and jazz sounds. They recorded their first demo in 2008, entitled “Jazz fi’ zzenga”. 2012, marks their return to the stage, with the arrival of new members and a rather rap-reggae influence.

Still in the influences of traditional Tunisian music, we find the band “BarBaroots” inspired by Berber ethnic group. Band is composed of six artists including Hayder Hamdi on vocals and guitar. Group was a first seed for a revolutionary sound, which was easily recognized. Under the dictatorship groups as such, couldn’t record or sell their music, which forced them to organize and perform their concerts underground. Their music is a real fusion between dub/reggae and Tunisian folklore Gnawa/stambéli, softened by the intoxicating violin. The group shouts out loud and clear its attachment to the roots, drawing their inspiration from Tunisia’s often forgotten African identity.

As mentioned before, Hayder Hamdi was a singer in BarBaroots but after the revolution he moved to Paris and started his own project. Both though, show the artist as voice of free youth of Tunisia. His thought-provoking lyrics have important spot in underground Tunisian music, which made a difference, which inspired for action. Despite the oppression, Haydar continued to write music and faced censorship, like many other young Tunisian artists as the lyrics were considered too sensitive for the government back then.

First in his abroad career he released a debut EP “404” in reference to censorship in the Ben Ali era. The EP introduced a new sound and other influences, including a Kanoun, a Reggae Roots groove, vocal effects, drums, guitar and a bass groove. The Oriental Dub became his domain. Haydar continued with “Pouvoir Au Peuple” (Power to the People) inspired by his daily life and album Fikra released in 2015 which is clearly pointing the post-revolution disappointment.

“I was on the street, with everybody,  they take you to the post office and type in Haydar Hamdi and say ‘oh your facebook is quite revolutionary, come here’. And we stayed for five days. So I feel like a child of that revolution.”

The main thing that came out of the revolution, he says is freedom of expression. “Now everybody in Tunisia can tell whatever he wants.” The problem is they’re not using it to change the situation many young people find themselves in. For example, jobless.

“There’s an economic crisis, work crisis, social crisis, people need a lot of things. But when you ask them what they want now they have freedom of speech, everybody’s talking and nobody’s concentrating on what we can do to resolve those problems.”

Hip-hop and rap is been always the voice of the rebels, voice of the frustrated youth. Same in Tunisia, rap music started to describe oppression in regime, longing for change and freedom of speech. Rappers took microphone to speak about social problems, their daily struggles and worries. Politically incorrect rap music was forbidden to perform, yet rappers often risked the wrath of the authorities under the Ben Ali regime, writing and recording in secret studios.

Since 2011 there have been numerous artists which made a point of speaking their minds, their lyrics often bringing them into conflict with the old regime. According to one of the country’s leading rappers (Balti) their music was the “fuel” for Tunisia’s revolution.

Balti is Tunisia’s well-known rapper and one of the founding fathers of hip-hop music in the country. His recording “Zine el Abadine Ben Ali and the 40 Thieves,” speaking of the former president deceiving his people. Balti says he was arrested and briefly jailed in 2005 for a song which wasn’t one of his.

El General is pseudonym of another rapper Hamada Ben Amor. He went viral after he was arrested by armed police at his home and taken for interrogation. The song “Mr President Your People Are Dying” was a personal message to President Ben Ali outlining the corruption and deprivations besetting the Tunisian people. Eight days later “El General” had been released and Ben Ali had fled the country.

Rappers admit that revolution started on the internet, where they could motivate people and break the fear. Worth to mention also rappers such as Philosoph, Ouled Bled, Psyco M, who stood up to those difficulties and made their voice heard.

Zomra it’s a group of several rappers, beat-makers, sound engineers (but alsograffiti artists, breakdancers, cameramen, producers, and more). It’s quite unique phenomenon within Tunisian hip-hop. Founded in 2011 — thanks to Djappa Man, Zomra has been growing over the past years.

After revolution, Tunisia welcomed new generation of rappers, where everybody has their own style.  The Tunisian rap scene is very productive but it is still widely based on self-producing MCs. I will just mention few others if you want to explore this topic farther:  T-man (Nizar…), Arab Clan (Karoura…),Warda Crew (Wistar…),Slim Larnaaout, Kamel Zmen, La Masse, Crach 13 ( BmG…), Armada Bizerta…

The most active from Tunisian alternative music is undoubtedly heavy metal stage. Bands such as Myrath, Persona, Nawether and Ymyrgar perform widely on international stage. Most of these bands sing in English and sometimes include Arabic sentences in the chorus of their songs. I admire all bands of alternative music, especially heavy metal, which manage their career in Tunisia. It’s not a country with big audience of these kinds of music, there is no media support, so they have to double struggle to be visible. Moreover, there are no labels, recording studios nor music producers that specialize in rock/metal (same goes for music videos), lack of venues, and so on. Obstacles are everywhere and it requires a lot of persistence and love for music in order to don’t give up.

As you already noticed I am fascinated in world music especially, when it comes with traditional, ethnic sounds. You can guess, that Yuma is my type of band and currently my favorite from Tunisian artists. Yuma is a duo of friends: Sabrine Jenhani and Ramy Zoghlemi. Playing melancholic music accompanied by beautiful voices, they totally stole my heart.

‘It was vital, imperative, natural, instinctive. Perhaps we arrived at a musical universe, or perhaps we created it,’ says Ramy Zoghlemi.

They started from mashups. Covers of famous songs played by Yuma became incredibly popular. Both decided to quit their jobs and get totally involved in their project spreading love for music. In result, they created their own album called Chura. While Tunisian hip-hip mostly expresses frustration and anger, Yuma comes to speak with the voice of youth which have a thirst for love and hope. Using Tunisian dialect full of idioms and adages makes their art like a poetry that accommodates a wider scale of emotions. Moreover, in conservative country as Tunisia, seeing woman collaborating with a man is maybe unusual. I am sure those guys are a great inspiration for youth from Tunisia. Pure love flowing from their songs, plus freedom of expression makes them real and unique.

Hope you enjoyed the music and now exploring more from the Tunisian alternative music which I didn’t mention. Feel free to share your favorite bands in the comments below. If you are interested how alternative music was shaping in Poland during political regime, I invite you to check: Protest Bands in Poland – Yell for freedom.