Home » Places » Indonesia » Borobodur Sunrise Tour – How it really was?

Borobodur – the biggest Buddhist temple in the world is Yogyakarta’s must-see. During the Borobodur sunrise tour I saw how light dances between the stupas and admired incredible view at this piece of art. Why is it unique?

My self- timer photo while someone passing by with the torch. In effect, my favorite shot from the Borobodur sunrise tour.

This one of the greatest Buddhist monuments in the world is also part of the UNESCO heritage list. Borobodur temple was built in the 8th and 9th centuries AD during the reign of the Syailendra Dynasty.

At Borobudur Temple, the kamadhatu is the base platform, the rupadhatu by the five square terraces, and the arupadhatu by the three circular platforms as well as the big stupa. Temple is huge! The total of 504 Buddha statues sit in meditative pose, and the 6 different hand positions represented throughout the temple.

The phenomenal world, the world inhabited by common people is the sphere of our desires. Borobudur’s hidden Kamadhatu level consists of 160 reliefs depicting scenes of Karmawibhangga Sutra, the law of cause and effect. Illustrating the human behavior of desire, the reliefs depict robbing, killing, rape, torture and defamation.

The transitional sphere, where humans are released from worldly matters. It’s the sphere of forms where we abandon our desires but are still bound to name and form. The Sanskrit manuscripts that are depicted on this level over 1 300 reliefs are Gandhawyuha, Lalitawistara, Jataka and Awadana. They stretch for 2.5km. In addition there are 1 212 decorative panels.

The highest sphere, the abode of the gods. The sphere of formlessness where there is no longer either name or form. The terraces contain circles of bell shape stupas, with sculptures of Buddha inside, who face outward from the temple. There are 72 of these stupas in total. Unlike the stupas surrounding it, the central stupa is empty nobody knows if it contained relicts, or it has always been empty.

I like when there is a bit of a mystery. It reminded me discovering Phonsavan in Laos, and its mysterious valley of Jars. I love that, still so much is undiscovered and uncertain in this world! Also here in Borobodur, some reports are misleading. During the restoration in the early 20th century, they discovered that two smaller temples in the region, called Pawon and Mendut, are exactly in line with the Borobudur Temple. Pawon temple is located 1.15 km from Borobudur while Mendut Temple is located 3 km from Borobudur. People believe that there is surely religious relationship between the three temples, although the exact ritual process remains a mystery.

The three temples are used to form a route for the Waisak Day Festival held each year on the day of the full moon in April or May. The festival commemorates the birth, enlightenment and the death of Gautama Buddha. Should that be the clue? 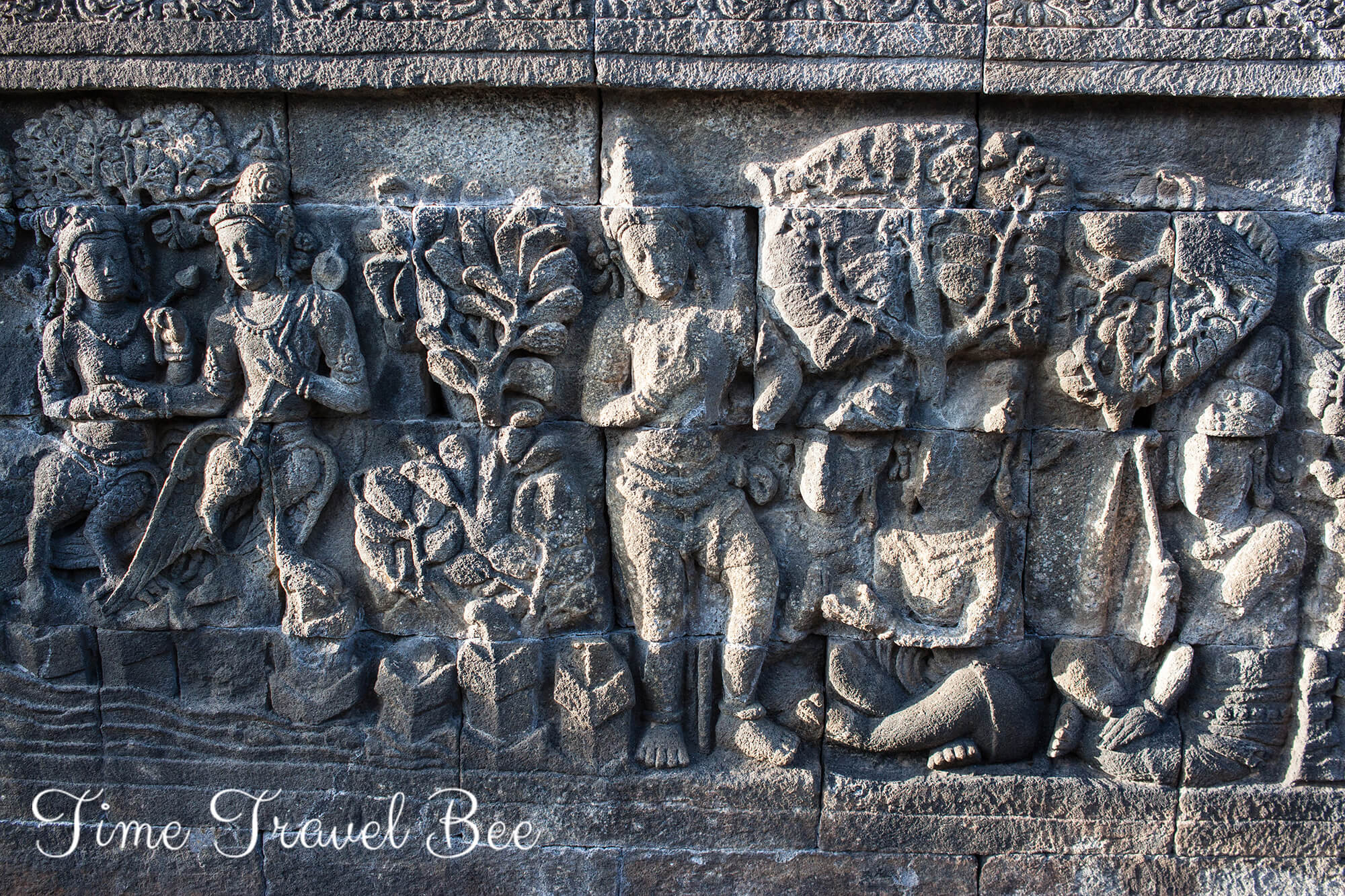 Borobodur Temple is not just the iconic bells, but also beautiful sculptures.

To see the sunrise, you need to wake up quite early, since temple is around 1 hour drive from Yogyakarta. Borobodur sunrise tour starts at 3. 30 to arrive at the place before 5 am and find some empty spot. The light just before the sunrise is the best for taking photos of the foggy hills behind, so it’s a good idea to come a bit earlier.

Since it’s the largest Buddhist temple in the world, crowd which takes Borobodur sunrise tour is insane. Here comes the reveal. These photos show how it really was and just imagine how much I struggled to make good photos, without selfie stick on it… I should get a prize, right? 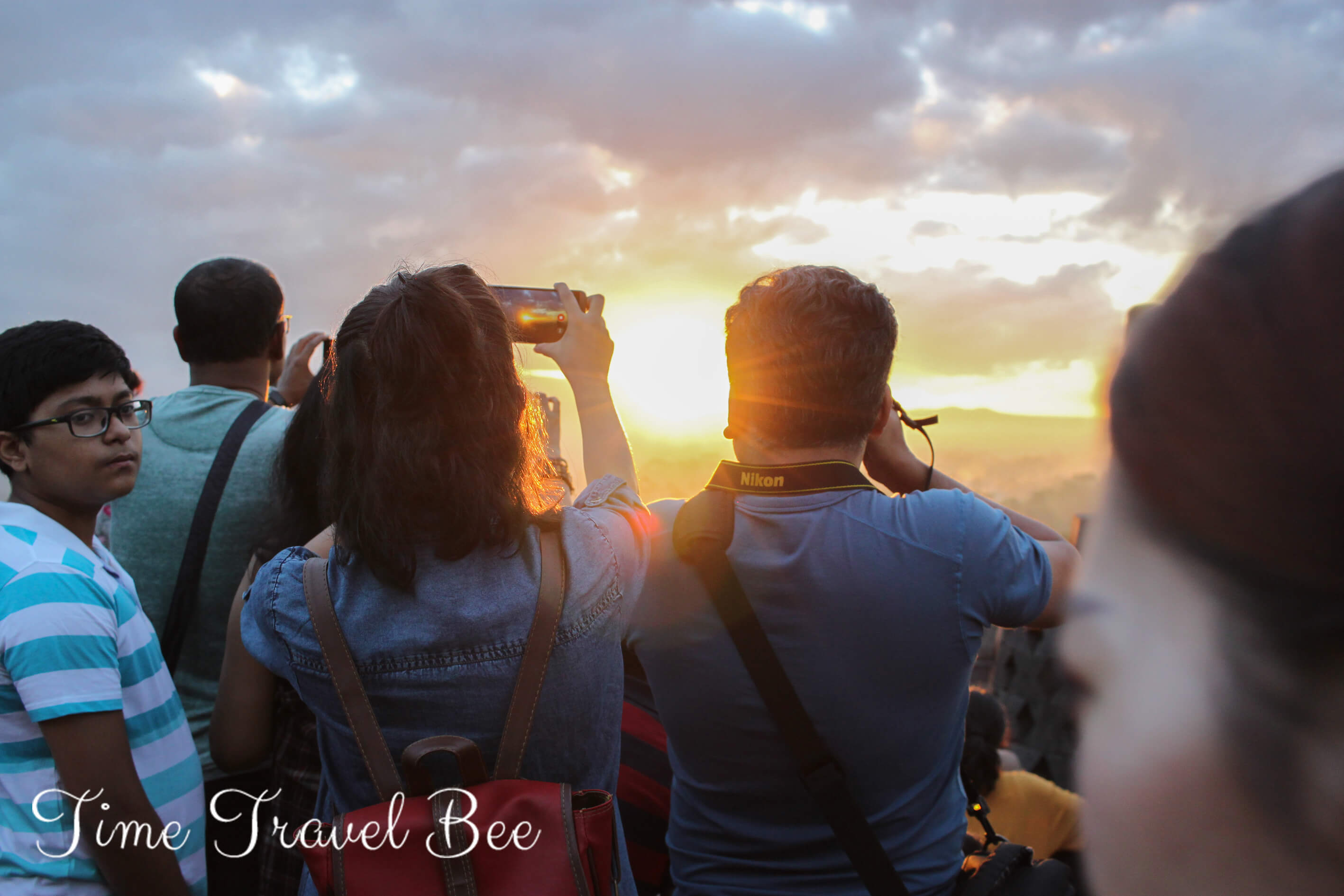 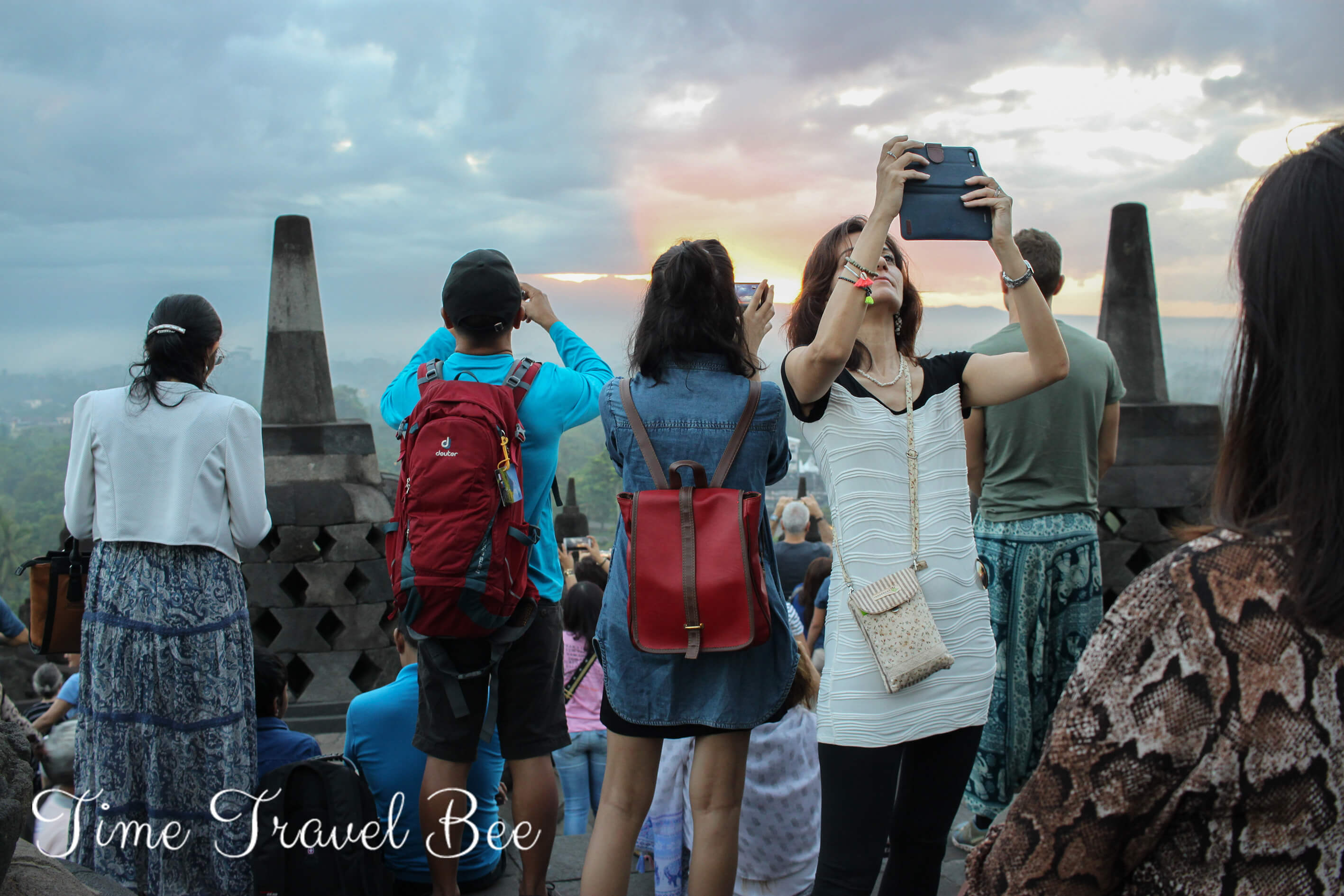 For this photo it was worth to kick, push and hit hundreds of tourists. Just joking.

Sunrise is around 5 40 and it’s the moment when everyone get’s ready with cameras. Try to find a spot to just sit and enjoy this beautiful spectacle of light, when sun rays go through the stupas and create amazing atmosphere.

Despite the crowd I can highly recommend doing Borobodur sunrise tour. From all the best things to do in Yogyakarta, I would definitely place Borobodur Sunrise Tour at the second place, just after hiking Merapi volcano. It’s temple like no other and sunrise is the best time to see its beauty. There are 3 the most important Buddhist temples in the world: Bagan in Myanmar, Anghor Wat in Cambodia and Borobodur in Indonesia. All of them I visited for sunrise and all were mind-blowing!

After that, Borobodur sunrise tour will continue for the Merapi lava tour if you chose it or straight to Prambanan temple and finishes around the lunch time.

Getting a glimpse of Hinduism in Prambanan

Prambanan is another complex of temples, this time depicting Hinduism. Built in the 10th century, this is the largest temple compound dedicated to Shiva in Indonesia. Three temples decorated with reliefs illustrating the epic of the dedicated to the three great Hindu divinities: Shiva, Vishnu and Brahma. As animals are important in Hinduism there are also three temples dedicated to the animals which serve the gods.

I felt like back in India, while visiting Prambanan. However, this precious complex was damaged in the earthquake in 2006. Fallen stones reconstructed into temples like a puzzles. Still, this is nothing in compare with the previous – Prambanan was completely in ruins for years until 1937 when the reconstruction started,  and it is still far from completing. You will see just a few temples out of 224! A lot of reconstruction has to be done.

Most of the people head to Borobodur while in Yogyakarta, but I think Prambanan is worth stepping in as well. They are located on the opposite sides of the city and that’s one of the reasons I decided to take Borobodur sunrise tour and have them both covered. I used services of a Bintang Indonesia Travel and I can highly recommend this agency as reliable and professional. They took a very good care of me and always knew where the best food is! You can discover with them the most famous sites of Yogyakarta as well as take part in some adventurous tour packages.

Have a great time in Yogyakarta!

17 thoughts on “Borobodur Sunrise Tour – How it really was?”