The mysterious plain of jars spreading over the territory of northern Laos, near Phonsavan. I am so glad I went to this place since it is not on the bucket list for most of the backpackers crossing by. There are few mysterious thories about this place.

Archaeologists agree that it is a remnant of culture inhabiting the area between the 6th century BC and the ninth century AD. This prehistoric people belonged to the mon-khmer language group, but until now we don’t know more about this culture. Jars (some still with lids) also exist in other parts of South-East Asia, but only in Laos survived in such a big number and great shape. They cover the area in thousands!

Plain of Jars theories – what were the jars for? 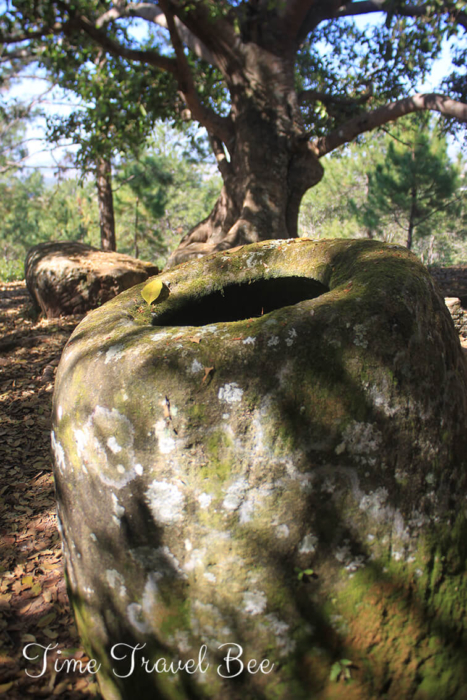 Here archaeologists stop to agree anymore… Madeleine Colani – French archaeologist who first explored this place claims that they were most likely urns for human remains. She noticed that the jars are arranged according to a pattern, mysterious lines. Areas where they appear she connects with path of the caravan trail from northern India to the valley of Mekong river.

Moreover, there is a huge cave in the rock which tourists can still visit. Marks examined by an archaeologist indicate that people burnt the bodies in the caves and used jars only to store the remains. As a confirmations Coloni found pieces of bones and bronze and iron vessels inside of them.

What is more, some researchers say that jars is not urn but a fridge! Cool stone creates perfect conditions to store food and water. There are also theories that jars have been made up of clay, sand, sugar and zoological adhesives. According to that, the cave discovered by Colani was actually a kind of pottery stove to make the jars. However, due to the fact that some urns were undoubtedly made of granite, scientists reject this theory…

There are many other theories, but Madeleine Colani’s research is by far the most reliable source of information. It must also be taken into consideration that jars have been created for hundreds of years, people have been able to use them in many ways during that time. You can see in video some more informationa bout the place and that current theories deny what Colani stated.

Were aliens on Plain of Jars?

Interestingly, the urns discovered in the mountain area did not have any burials, which may mean that those were the work of people unrelated to the creators of objects… UFO? Urns are mostly made of sandstone and have different sizes. Some are really huge even up to 3 meters height! Such jars with stone lid can weigh even 13 tons!

The question is, what kind of people needed such a large urn? The same question asked themselves residents of Laos and they repeat the legend words that on this area lived race of giants. Their king Khun Cheung defeated his enemies and ordered the great stone vessels in which they brewed rice wine (lao lao) to celebrate the triumph. Indeed, one of the things you need to know about Laos is that in Phonsavan they give you lao lao at every corner… The guide who took us to the Plain of Jars stopped in the middle of the road at the family house producing the drink. But this story maybe in a separate article…

Stepping on the minefield… 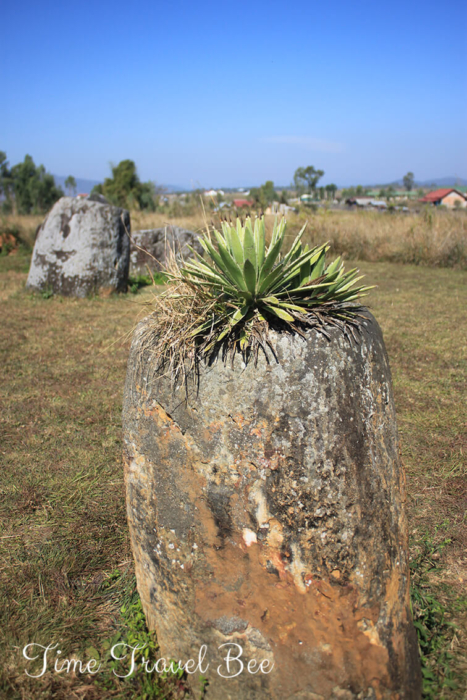 Phonsavan district is one of the most mined in the world because of the US attacks, which dropped more than 2 million tons of bombs here! Can you imagine that? Just because the Ho Chi Minh Trail providing food and ammunition to southern Vietnam during this bloody war was running through Laos. By the presence of cluster bombs people are dying  until these days, and most of all, the children. You can read about this tragic story and see the films at the small museum in Phonsavan. Every day there is a screening for free to make people aware of how great crimes were done by Unites States here. Only for those with strong nerves! I will remember forever what I have seen there…

Tourists in Phonsavan can safely walk only in marked areas that have been checked and cleared. While writing this, I started to cry… Memories from the museum of this cruel massacre that the US made in this area came back. Imagine what archaeological zones look like: all marked with lines: checked here, not there. All around surrounds you yellow emptiness – the whole area which was a green jungle is now a dead steppe. This is because of “agent orange” chemical weapons used by the US to get rid of the forests and better see the enemy from the planes… As a result, 3 million hectares have been degraded and more than one million people are suffering today!

… and gazing into the jars

Strolling through this huge minefield and gazing into every jar, you realize some people treat it as a trash bin. The tourist can freely visit the archaeological sites, but I think that will soon change. Unfortunately too much freedom leads to the destruction of jars, because everyone can jump on them. The authorities of Laos are trying to make the Plain of Jars a UNESCO heritage site. This would certainly bring massive changes! Laos is a poor country, and land clearance of bombs  and protecting the archaeological sites is an expensive undertaking. It can only take place with the help of foreign sponsors and services. 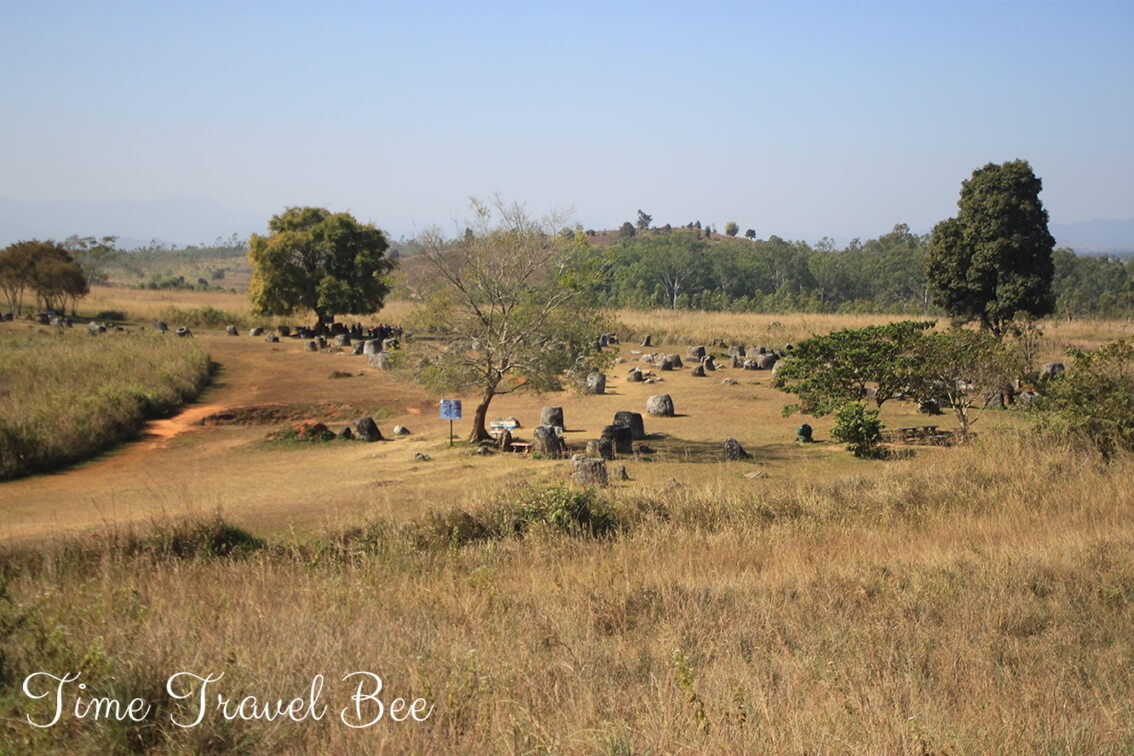 In conclusion, because it got a bit dramatic in the end what I had not planned, Phonsavan is a place full of HISTORY. Unfortunately, I could not help but mention the sad events that are associated with this region. I wanted to encourage you to visit this place, not to discourage. I hope I succeded. If you are looking for what to see in Laos that should be definately spot to cover. 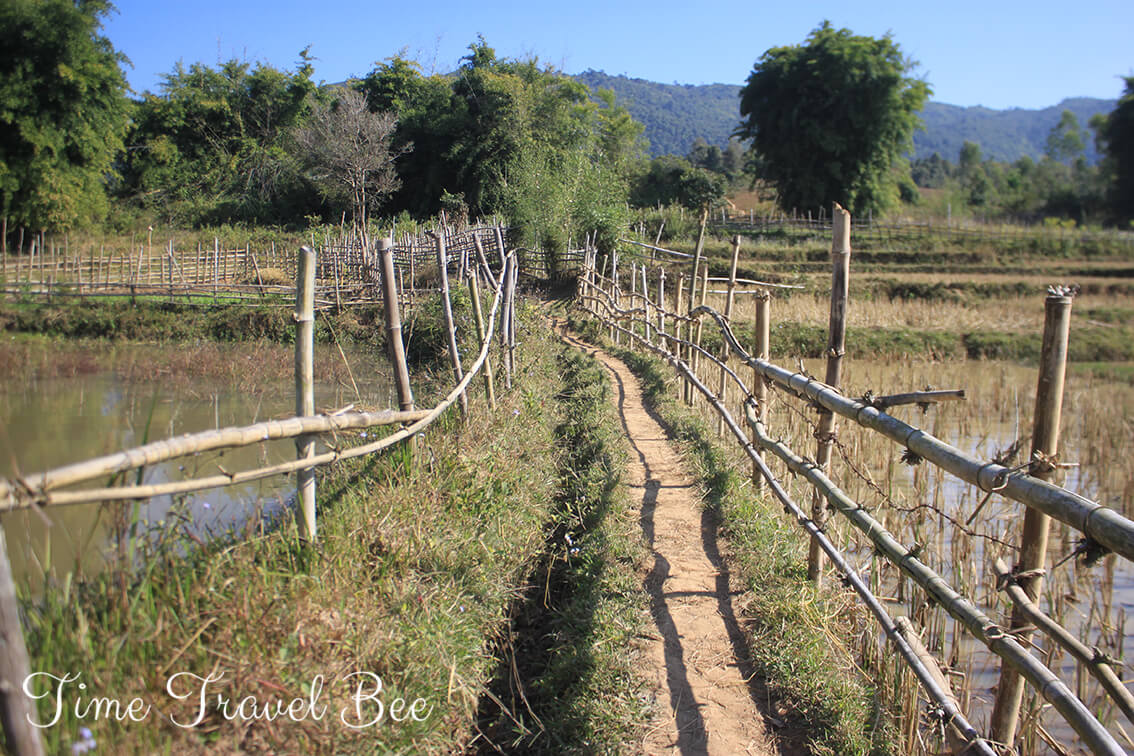 Sometimes way to another archaeological site goes through the fields. 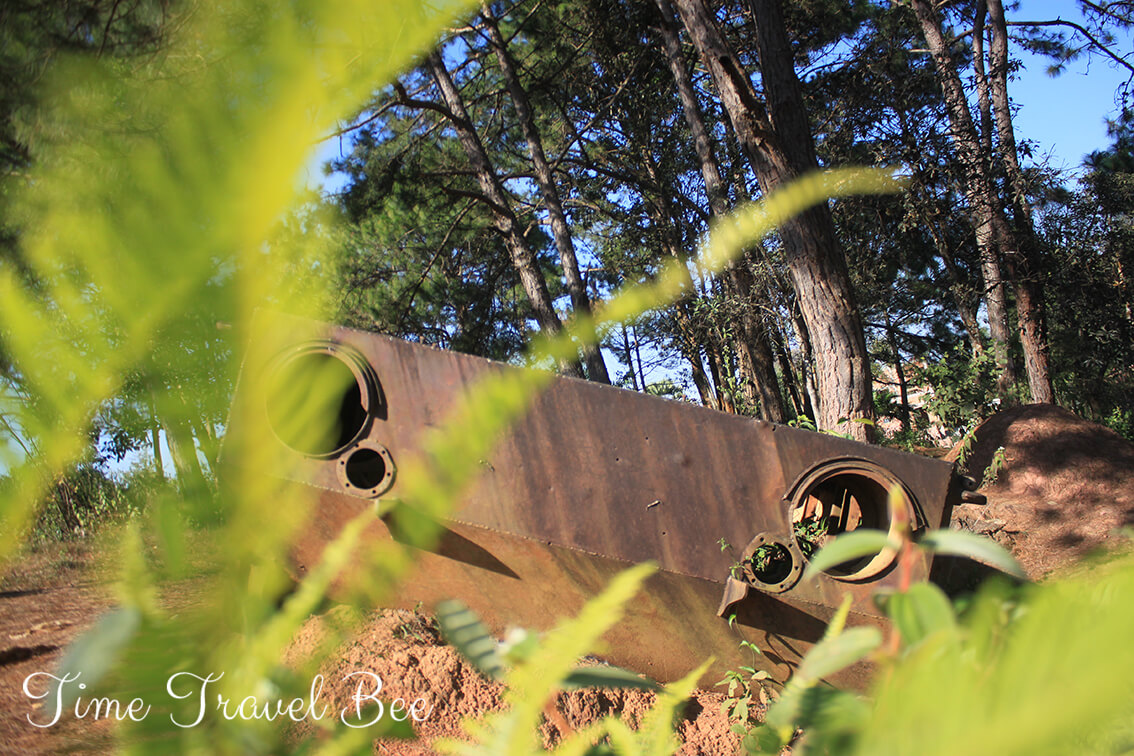