Imagine entering 200 km long wine cellar Milestii Mici with your own car and Moldavian sexy guide sitting just next to you, telling the story of the winery. You feel like inside of a labirynth of underground wine streets. Sounds great already? Fast your seat belt, the adventure in Milestii Mici has just begun!

Along the limestone walls you see huge 2 000 litters capacity barrels filled with wine. Driving around few kilometers takes you to lower gallery where bottled wine mature. You see 2 million of bottles of this holy juice all around you! Mind blowing! You are in the biggest wine cellar in the world – Milestii Mici. Guide showing you hidden cellar which was used in Soviet times to store precious wines in secret, room impossible to detect. Don’t get too excited because you haven’t arrived to wine tasting yet!

Going by car in these underground tunnels feels overwhelming when you see massive wooden barrels all along.

Welcome to the biggest wine cellar in the world – Milestii Mici

Milestii Mici is Underground Kingdom of Wine in Moldova. This little country in Eastern Europe is proudly announcing to be “open doors in the paradise of wine”. Truly tempting slogan, that’s why I came, right? In the same time, Moldova is the least visited country in Europe but hiding Mileștii Mici which is the Guinness World Record as the biggest wine collection in the world. I bet you didn’t expect that!

Milestii Mici was founded in 1969 to store, preserve and mature high-quality wines. In fact, now only 55 km of tunnels are in use from 200 km used during all Soviet times…

Milestii Mici is an old mine which became a winery

Enormous limestone mine started to be a winery due to it’s perfect conditions. Constant temperature in the cellars is 12 – 14°C and relative humidity of 85-95% (so don’t forget pullover). Those ideally contribute to storage  precious bottles and barrels. Yummy! From all over the country here were brought the wines from the years of the best harvest and were stored for maturation. At the moment Mileştii Mici has their own wine, but also purchases grapes from other companies, depending on their geographic location, to produce a certain kinds of wine.

Overall, the complex holds nearly 2 million bottles called Golden Collection. More than 70% of the stored wines are red, 20% are white and about 10% are dessert wines. The most valuable items of this collection, worth €480 a bottle, were produced in 1973–74; they are now exported only to Japan (God I didn’t expect Japanese appreciate wine that much!). The wines stored here are made from crops of various years, beginning with 1969: “Pinot”, “Traminer”, “Muscat”, “Riesling”, “Feteasca”, “Dnestrovscoie”, “Milestscoie”, “Codru”, “Negru de Purcari”, “Trandafirul Moldovei”, “Auriu”, “Cahor-Ciumai”, and others.

Wine cellar produces one million bottles per year. Wines are exported to Sweden, Japan, USA, Czech Republic, Great Britain, Poland, Greece, Germany, Denmark, Finland and China. The last one seems to be the biggest drinker of it which is absolutely surprising for me. Aren’t they drinking just sake and other rice alcohols? Just joking.

The interesting thing is that you can rent a niche for cost of 200 USD per year to store wine and sell it more expensive later. Sounds like a plan! 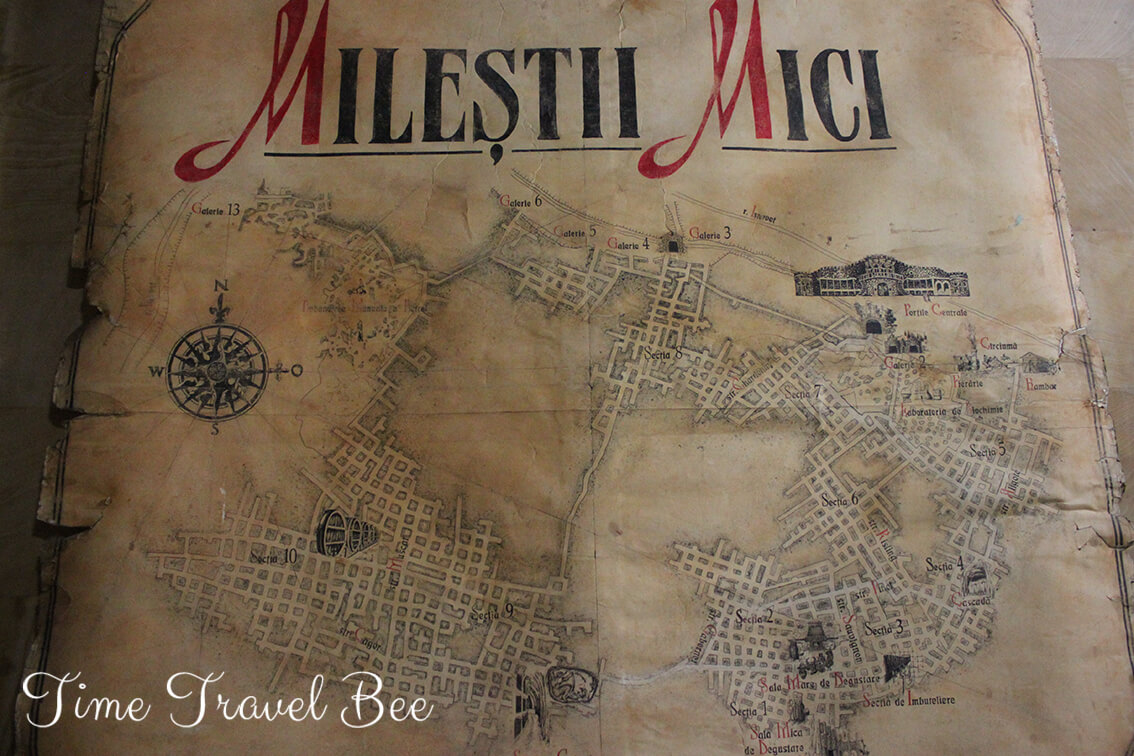 Wine tasting comes in the end of the tour. Milestii Mici provides variety of ticket options from simple tasting of few kinds and Moldavian snacks to huge feasts. So if you want to organise family gathering or wedding in the biggest wine cellar in the world, go ahead. We chose the most simple option which included 3 different table wines (red, white and dessert table wine) plus some freshly baked pastries and regular crackers or snacks. Normally you think wine tasting is a glass filled with a drop of wine called 1 dcl. In Milestii Mici we got 3 jugs fulfilled with wine! Unbelievable! Even though we were all Polish, we couldn’t finish those in a short time given. Sadly, because wine was absolutely perfect! All these goodies with accompaniment of folk musicians which will surely know some music pieces from your country. Tasting turn out to be a feast for us as well. So much fun!

Tasting room is very elegant with shiny decorations, I would call it trashy but I was tough to don’t question someone’s taste. We were told that this room was originally hidden behind the rock and opened with a secret button. Room like that was kept for important people, obviously. The legend says that Putin has his own secret cellar with wine in Milestii Mici, but don’t tell anyone.

Hop in your car and come to Moldova

It is recuired that you come by car to visit the winery, because they don’t provide car rental. If you fly to Moldova you will have to rent one on the airport or come by taxi, which will be expensive. Rememer also to leave one place in the car for a sexy guide, which will come with you. Outside of the winery there are two fountains gushing with red and white wine. We tried, just in case, it’s fake. But there is a real SHOP next to it. You can purchase delicious wines from very cheap (but still good) to high class as the Japanese dare.

With our trunk full of bottles we were stopped on the border control. The officer seriously asked about certain kind of wine looking at our storage. We proudly said “No, we don’t have this one” thinking that ufff… we have just skipped the punishment. Then he burst out laughing as he managed to make this serious joke again and said that we should definitely go and buy it because it’s so good and we have the last chance before crossing…

I highly (times million) recommend to visit this great winary and the little country of Moldova, which has some great landscapes as well. While tourists head for wine tours to Tuscany in Italy or Bordeaux in France, Moldova is still off the beaten path and undiscovered by mass tourism. I am sure for those who love nature and wine tasting, Moldova will be a great choice.

It’s not that I like to drink or something, but I lived one year in Cognac, France where the great spirit with the same name is produced. I have learnt a lot during that time about cognac production. I invite you to read about my Cognac experience and learn which cognac you should buy and which is a crap.