Ancient ruins in Timgad, Algeria is one of the most beautiful Roman sites in existence. Established on a perfect square grid, it’s a prime example of Roman town planning. No wonder why the ruins in Timgad gained the title of the Pompeii of Africa. I love to visit ancient towns, and Timgad was definitely the highlight of my trip to Algeria.

Timgad is one of the few Roman towns in Algeria. I already wrote about the Tipaza ruins – one day trip from Algiers, which were beloved of Albert Camus. I have to admit Timgad is much more impressive than Tipaza, and very well preserved (currently under UNESCO protection). Walking around the ancient ruins seems so authentic. You have the real street under your feet, hear the water canal underneath. The beautiful columns still standing almost 2000 years, what’s more the ruins of the forum, capitol, houses, and even the toilets. 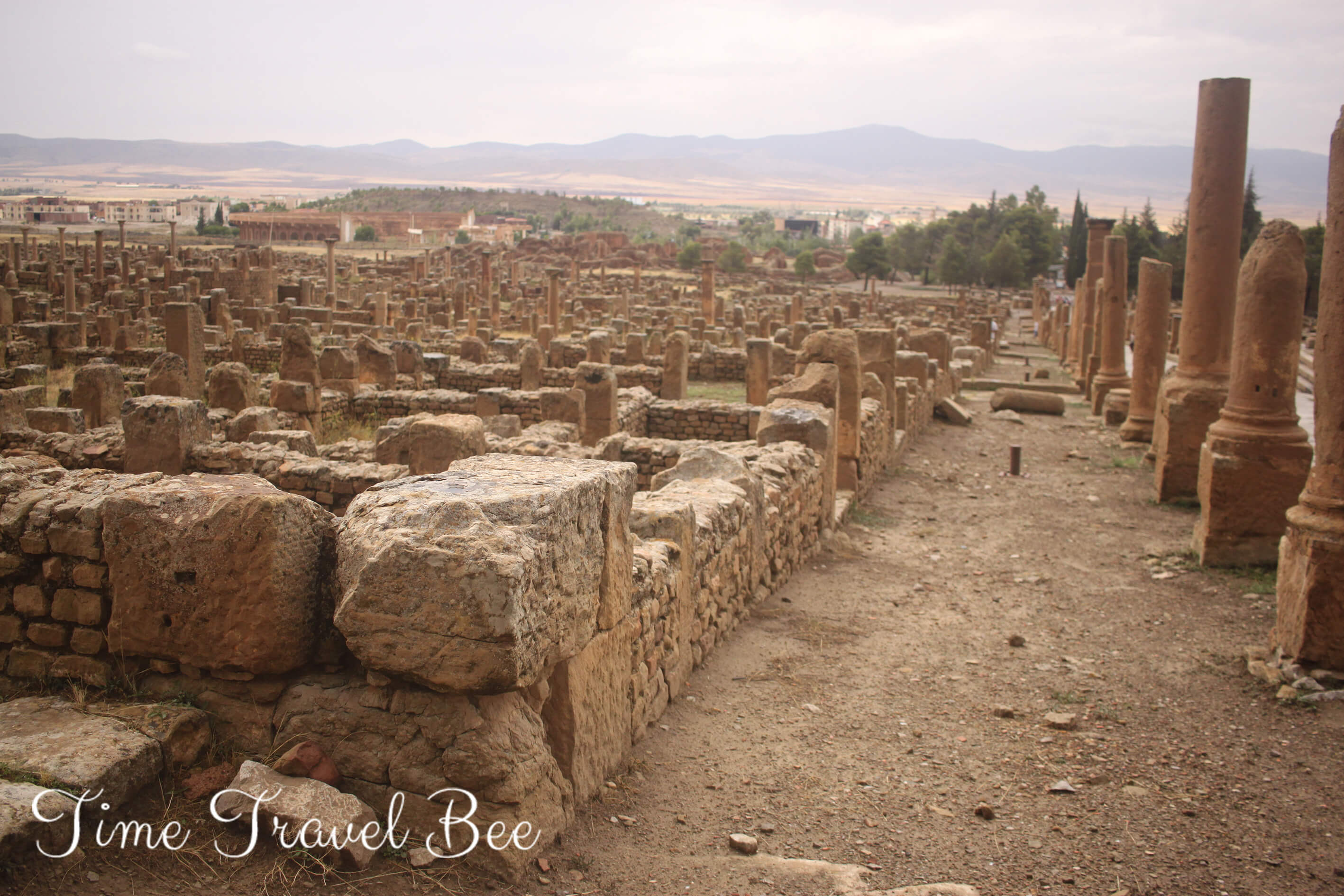 Ancient Roman Ruins in the middle of nowhere?

When I got there I was surprised that I am actually far from the sea, as most of my memories of the ancient Roman towns, were on the coast of the Mediterranean Sea. Ancient ruins in Timgad, however, are far from any modern city, and around 170 km from the coast. Why Timgad was built there? The function of this ancient city was to control one of the main passes through the Aures Mountains to the Sahara Desert. Therefore, in 100AD Trajan, the Roman Emperor founded the military garrison town here.

Walking around ancient ruins in Timgad – what to see?

From the entrance, the path leads next to the gallery with pieces of sculptures and ancient inscriptions on the left. Soon you will see a red bricks building, standing out the stone ruins of Timgad. The Great Baths of the North, a huge public place of some 40 rooms. The baths were symmetrical, with the same latrines, warm and hot rooms on either side of the complex. The baths were originally out of the city gates.

Walking up the street you will finally enter the city of Timgad. Ruins of the houses all around and beautiful columns on the sides of the street. What a beauty!

The most interesting building on this street is the public library (for me were ancient toilets btw) . It’s special because it’s one of the only two known Roman-period public libraries, the other being in Ephesus (Turkey). If you get in, you can still see the niches for storing the ‘books’ (actually manuscript pages or parchment rolls).

Soon you will reach the center of the city, where cardo maximus – the main north–south street meets the decumanus maximus, the town’s main east–west artery. City center was a forum, large open space, surrounded by limestone Corinthian columns, statues, temple and municipal offices.

Trajan’s Arch – the pearl of Timgad

If you continue to the right you will reach the most impressive building remaining in the ancient ruins in Timgad – the Trajan’s Arch. The gate was very elegant with columns and statues. The high central passage was for chariots, the arches on the sides for pedestrians.

Going left you will be passing next to the Sertius Market up to the ruins which impressed me the most in Timgad. The capitol with huge columns still standing and some of them fallen apart. The capitol was dedicated to the gods Jupiter, Juno and Minerva. This was the most sacred place of pagan worship.

Continue walking towards the theater. Imagine, that it could host 3,500 people! From there you can admire the view at the whole ancient city of Timgad. Most of what we see today is reconstruction by French archeologists. Soldiers building the nearby fortress destroyed the original theater in 539. The Byzantines chose to build the fort outside the original settlement. You can still see the wide walls remain.

How to get to the ancient ruins in Timgad?

Timgad is far from any big cities. From Algiers or Constantine you can take a bus to Batna which is around 50 km from Timgad. From there you can search for a bus or a shared taxis to Timgad.

The whole open space of the ancient ruins has no trees, and it’s very windy. Remember to take some warm clothes, as it might be a bit colder than in other parts of the country.

The ticket to The Pompeii of Africa costs 200da, which is less than one euro, if you exchange money on the black market in Algeria. Outside the entrance, there are few souvenirs stands, where you can get some local and Chinese stuff.

I haven’t seen any hotel nearby. The closest you will get in Betna. However, I think in Constantine you will get a better choice of accommodation. Visiting Timgad is a perfect idea for a one day trip from Constantine.

Have you visited the ancient ruins in Timgad? Share your views in comments below! Let’s inspire each others!