The Kasbah of Algiers is an outstanding piece of history. As people living in Kasbah say: “It’s impossible to enter the house without story.” The heart of the city forms the citadel and traditional quarter clustered around. Old quarter is like a labyrinth of lanes and densely packed white-washed houses that are very picturesque.

This hill inhabited Phoenicians since 6th century, later it became a Roman town. Buildings you can see currently, however, are mostly remaining after Ottoman Empire rule between 16th and 18th century. During the bloody “black decade” of Algeria’s 1990s civil war, the Casbah was the feared bastion of Islamist terrorists. Now the new battle is underway – to save the heart of Algeria from total destruction.

Is Kasbah of Algiers dangerous?

Most of the guide books will tell you, Kasbah of Algiers is a dangerous place. Indeed, even locals will tell you that. If you go there alone by night, remember to call your family before to say goodbye. Going there during the day is not so risky and what’s more you will meet a lot of friendly people which will try to help you. Be aware of guides or taxi drivers which just want to make money telling that it’s impossible to visit Kasbah of Algiers without a guide.

If you are traveling with friends don’t worry at all. You can visit Kasbah of Algiers by yourself. If you are traveling alone and prefer to go with someone, why not contacting trustable Couch Surfer to meet and show you around? You will be safe and have the best local guide possible, as he or she would be showing it to you as to a friend, not as to a client. I did that visiting old part of Oran, where I asked local CS members to meet and I was lucky to have the best guides ever!

The truth is that Algerians tend to sit on the street and comment or catcall people passing by, especially girls. While in the neighbour Tunisia for catcalling you can go for one year to prison, in Algeria it seems to be a very strong part of the culture. One Algerian girl told me, she gets around 20 comments per day from random people on the street! That’s a huge number, if you think that she covers her body and hair with a veil. Cannot imagine how many comments I got walking around the streets of Algeria because simply I don’t understand the language. In this case I kind of find myself lucky, not being able to understand some stupid taunts. Just ignore them! Read more about safety in Algeria.

Map of touristic attractions in The Kasbah of Algiers

I decided to make a useful map of touristic attractions and places of interest in Kasbah of Algiers. I used screen shot of Google Maps and added numbers to make it easier to follow. Below, you will find description for each number on the map and photos of the place. I will try to prepare PDF to download, so you can see the map more clearly. 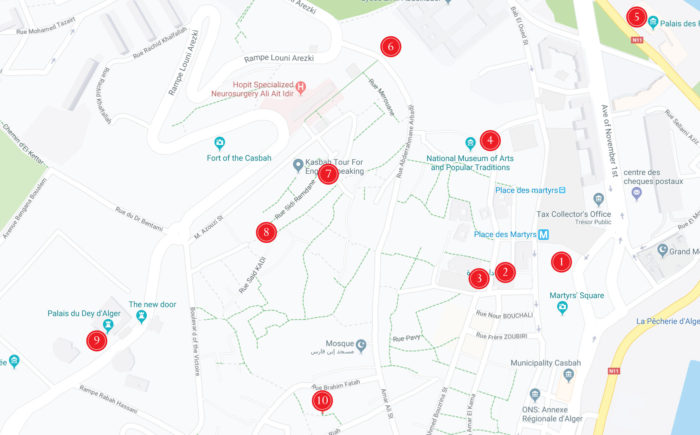 Visit the Kasbah of Algiers without guide – itinerary 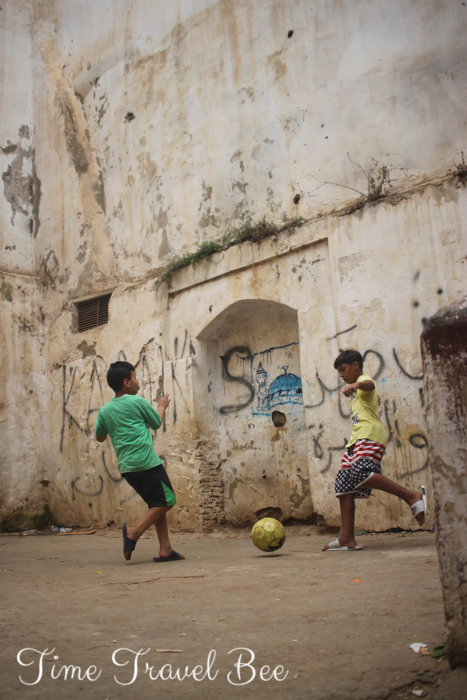 I invite you for a walking tour around Kasbah, full of history falling apart. Unfortunately, Kasbah is in very bad condition, and it will take a long time for UNESCO or Algerian initiatives to restore it. Above mountains of trash it can be clearly seen that this piece of history is surely worth the investment.

1. Place of the Martyrs

See the buildings around, beautiful architecture facing the sea, the main road going over the buildings which are the remains after the French colony. Just in front, there is a port where all the incomers were arriving during that time. Imagine how surprised they were, when instead of camels running around they saw a huge achievement in architecture in a very developed city for that time? They wouldnt’s say bad thing about colonialism at all.

Place of the Martyrs is also a metro station. The city with over two thousands years of history is facing the same problems as Athens or Rome when it comes to digging the metro tunnels. One important archeological site you will see just next to the station. It shows discovery traces of their country’s ancient history, they thought had been erased by French colonial rule.

Definately one of the most beautiful palaces in Kasbah of Algiers. Dar Aziza was built in the 16th century, some time after Algiers became the capital of an Ottoman regency. The designation of Dar

The palace reminded me of the riads inMorocco with the square courtyard and the water fountain in the middle of it. In fact, function of this yard is to provide ventilation to the galleries then to the different areas of the palace. In Algeria this kind of palace you can also see in Tlemcen, close to the border with Morocco. It’s very beautiful!

A great mosque on the foot of the Kasbah of Algiers has over 3 centuries of history. Built by Ottomans in 17th century, later changed into the cathedral during the French occupation. You can see old pictures of the St. Philippe Cathedral in Dar Aziza Palace. Unique architecture is a fusion of Moorish and Byzantine styles. In 1962 it was reconverted again into the mosque. Unfortunately, currently it’s closed for visitors.

This lovely museum will show you lots of traditional clothes from all over Algeria and many old crafts of Algerian art, including rugs, jewellery and pottery. This beautiful Ottoman palace is also known as Dar Khedaoudj el-Amia. It follows the classic town house plan, with an entrance leading to an inner hall and a staircase up to the principal rooms.

This palace also known as ‘Bastion 23’ is a complex of four palaces and several houses built on the seafront in the 16th century on the orders of Ramdan and Mustafa Pasha. The French military occupied it for a while, after which it served as the American consulate, a school and a library before becoming the most successful restoration project in the city. Nowadays, it’s home to the Centre des Arts et de la Culture, which hosts some art and photography exhibitions as well as performing arts and lots of concerts. If you have time to step out of our little tour of Kasbah of Algiers, you can enjoy this beautiful Ottoman palace.

Sidi Abderrahmane is a mosque and mausoleum named after the city’s patron saint. The main building was constructed in 1627, and the mosque where locals pray was added in 1696. The mosque also has a small graveyard, where some very notable people are buried, including Sidi Abderrahmane himself. The chandeliers decorating the interior were a gift from Queen Victoria of Great Britain. 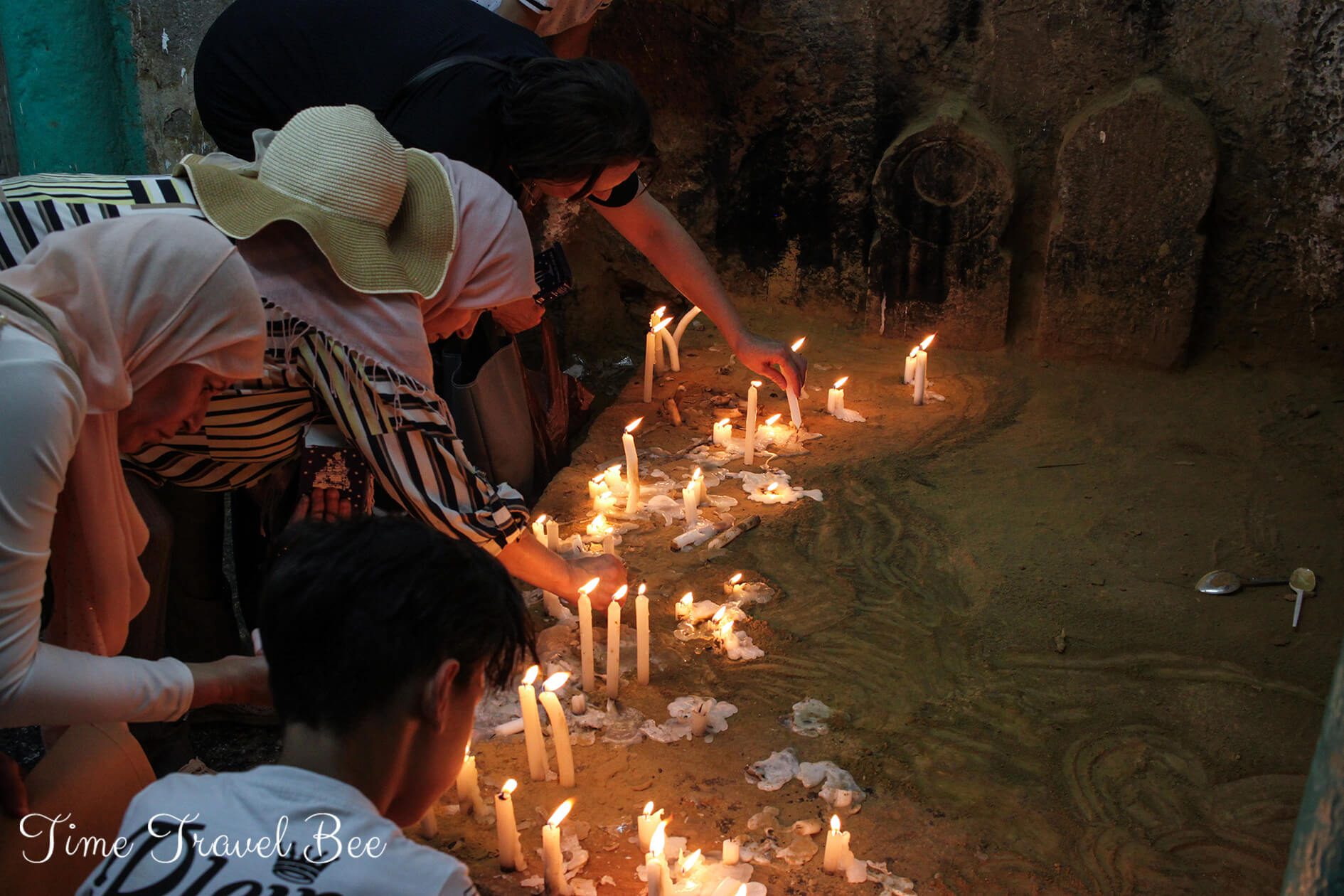 Sidi Ramdane, built in the 11th century, is one of Alger’s most ancient mosques. Because of its location and importance to the citadel, it is also called the Mosque of the Old Casbah. The building is very similar to the Djamaa el-Kebir mosque, which is located in the Place of Martyrs. 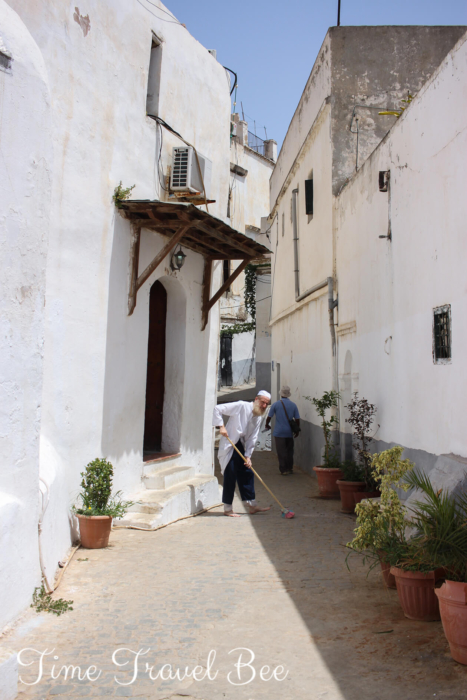 Khaled Mahiout is local artist living in Kasbah of Algiers. You can see his workshop from the street. Lot’s od wood works and paintings inside and a little staircase which will guide you to the best panoramic view in the Kasbah. Khalet Mahiout gives free access to see the terrace of his own house, isn’t it amazing? I think, it can happen only in not touristic countries as Algeria.

9. Palace of the Dey

On the top of the Kasbah of Algiers, you will find a large fortification of Palace of the Day. Unfortunately, it’s still under construction and you cannot enter inside. However, from outside you can see the gate and huge walls of the citadel. This “castle” was a house for all the deys during the Ottoman period. What’s interesting, it was the second largest palace in the Ottoman Empire, after Topkapi Palace in Istanbul. 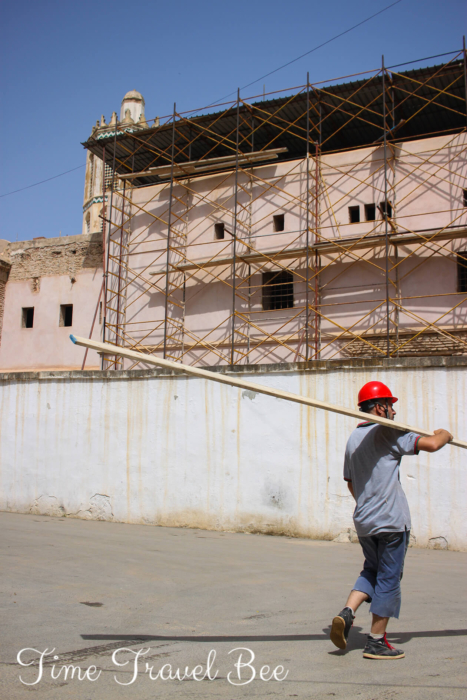 10. Memorial of the Battle of Algiers

A little memorial of the Battle of Algiers where young freedom fighters died struggling for independence from French occupation. The most known heroes of this battle such as Ali la Pointe or Hassiba Ben Bouali died hiding in this house, when French troops bombed the place. There is an Italian-Algerian movie called The Battle of Algiers which depicts the fight for independence.

The memorial in Kasbah is hidden in one of the narrow streets. Surrounded by colorful graffiti brings lots of visitors curious to learn about the history of Algiers. It wasn’t easy to find location of Memorial of Ali la Pointe on Google Maps. Don’t listen to the taxi drivers which want to make money – you can go there by yourself. The address is Abderames St. bulding nr 5. 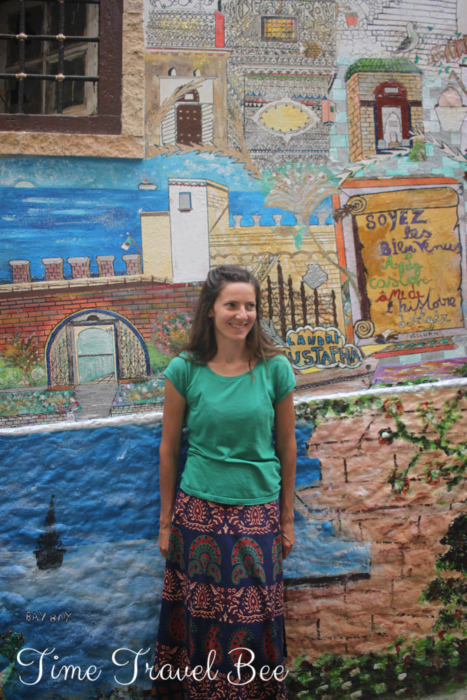 Get lost in The Kasbah of Algiers!

The tour I have just offered you covers the most important as well as the most beautiful places of the Kasbah. Apart from that you will see plenty of narrow streets on your way. Don’t hesitate to check them as you will be able to discover the real life of the Kasbah.

You can make pictures on the streets of The Kasbah but remember to ask before making picture of random people. They may not like it, especially woman covering their head with a veil.

In my opinion 2 days for Algiers is a perfect time. I recommend taking the whole day to visit the Kasbah of Algiers, have time to get lost in a narrow lanes and discover a bit of a history. When planning the tour, remember that it’s all set on the hill with a lot of stairs. The second day you can see the rest of touristic attractions in Algiers, which I mention here: 2 days itinerary in Algiers. Share your tips and experiences from visiting the Kasbah of Algiers without guide in the comments below and let’s inspire each others!

34 thoughts on “Kasbah of Algiers without guide! Map + itinerary”