I am writing about my favorite place in Morocco’s Blue City Chefchaouen. Famous for blue-rinsed houses set on one of the hills of the Rif Mountains. It’s definitely one of the most picturesque towns I have ever seen. If you just scroll through social media, you will see plenty of photos from Chefchaouen.

Town looks like from a fairy-tale! It was so much fun to get lost in the labyrinth of narrow streets and blue buildings. I am a big fan of colorful cities, are you? What I also loved there was its calmness – in the old part there is no traffic, just small pedestrian streets leading to the main square. After few days there, I was feeling so relaxed, I didn’t want to come to the streets full of cars hustle and bustle again.

Buying blue pain on the street of Chefchaouen is easy and cheap. Citizens of the blue city are encouraged to paint their houses blue for growing tourism.

Blue is a popular color in Morocco. Many old cities have medina (old market) in blue and white colors. Chefchaouen, however, has its unique style – blue is more vivid and white is less popular. I was asking people and doing research and found out the true about Morocco’s blue city Chefchaouen blues.

First of all, there is a theory that Jewish refugees which ran away from Hitler in 1930 painted the city in blue. The reason was that blue color symbolizes the sky and heaven. Secondly, blue color deters mosquitos and flies as they are afraid, that’s it’s water. That’s why plenty of fishermen towns all around the world are painted in blue. Looks at Greece for example, where windows and doors were painted blue to stop the flies entering the houses.

Both theories seem to be true, but the only certain fact is, that blue city of Chefchaouen attracts visitors, which love to wander the calm streets and shoot some beautiful photos.  You will admire lovely lanes during the day as well as with the night lights. Morrocans walking by in their traditional clothes or cats stalking for food, look great with the blue background. When you are there, you literally want to take photos all around, every single second.

What is blue city of Chefchaouen famous for?

The blue city is famous not just for the blue color. Rif Mountains are source of hashish for all Morocco as well as export. Local hills all over cover this plant. This also effects the citizens – they move in a slow pace, along with the town. I traveled to many destinations in Morocco and had the impression that everyone is peaceful here, so are the streets of the old town without cars and noises. It is extremely easy to buy some hash almost on every corner.

Moreover, blue city is known for hammams – Turkish bath, which are numerous here. Have you already done it? A hot sauna and old women turning you like a sack of potatoes and scrubbing your body with a rough pad to remove the dead skin. Yummy! Let’s do that! 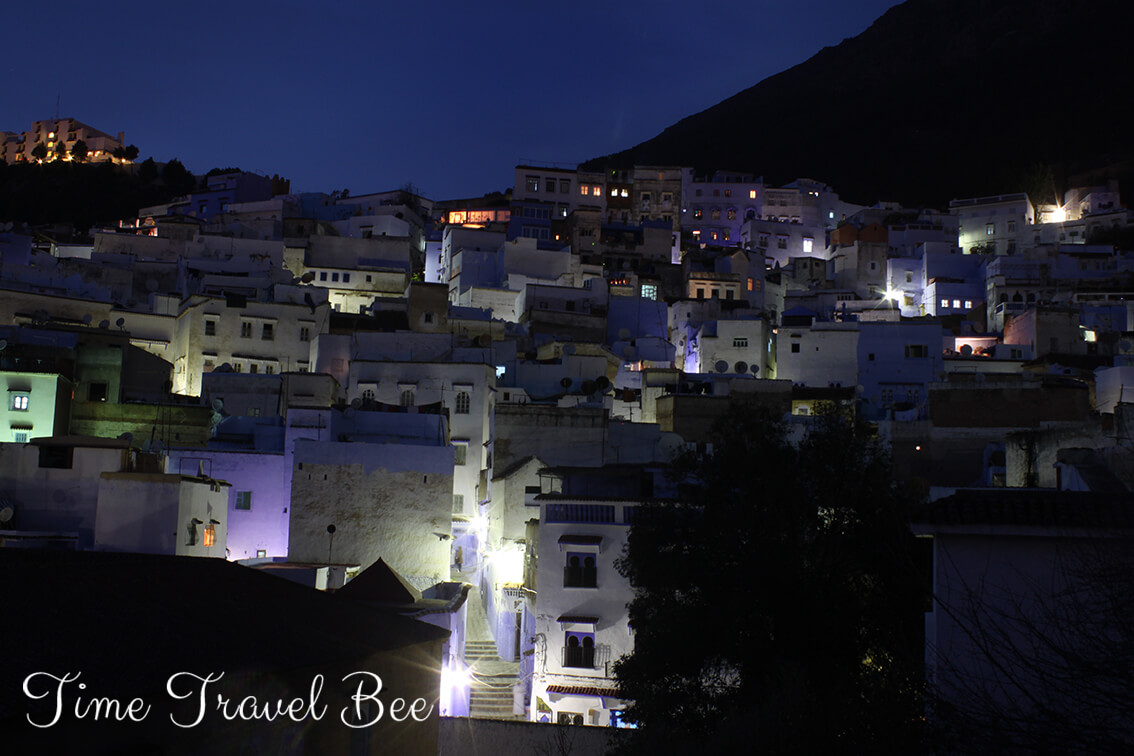 What to see in Chefchaouen?

Blue city is a small town. Most of the people come here just for two day, but some stay longer just to relax. Walking around old medina to enjoy the mesmerising blue streets is not all! You can go out of the medina walls, up the stairs, to see the stunning view over the blue city. Highly recommend getting there for sunset!

Besides, there is a little hike to the spanish mosque, which is on another hill. The view from there is stunning as you can see the blue city of Chefchaouen just in front of you.

If you start to feel too blue get out of the medina towards the waterfall Ras el Maa. This waterfall is on the east end of the medina and is where the locals gather to socialize.