Beyond doubt, Balinese culture is unique! Justifiably known as “The Island of the Gods” is the most popular tourist destination in Indonesia. Ever since I first came to the island, I’ve been fascinated by its people, colours, culture, rituals and all the things that were so different to me. It was intriguing and beautiful. I wanted my trip to be unusual, to know more about Balinese culture, to know why they make the offerings and understand the rituals. I wanted my trip to be less superficial. Understanding the rituals and beliefs of another culture stretches our minds. It helps us to understand that another’s reality is as real as ours.

Indonesia is the world’s largest Muslim nation with the percentage over 80%. Culture of Bali is very different from the national mainstream, due to its unique Hindu-animist religion. Foreign conquerors and visitors may come and go, but Balinese culture remains. How wonderful is that?!

Why Balinese culture is unique?

I couldn’t summarise it better than Dr. Jukka O. Miettinen: “Bali is the home to its own type of religion, Bali-Hinduism. It combines elements of animism, ancestor worship and Hinduism, which was received from India almost two millennia ago. After that Hinduism developed in Bali through several steps into its present syncretistic form. Religion is very much a part of everyday life in Bali. Morning starts with offerings given to various parts of the house, trees, rivers, etc. A complicated system of several simultaneous calendars gives an almost daily reason for minor or major temple festivals somewhere on the island.”

The rhythms of the Balinese religious calendar dictate days of obligation, feast days as well as daily personal rituals. Every evening I saw people gathering together next to the temple. Praying of course, but think how these meetings increased their sense of community? Rituals also connect Balinese people to their families, ancestors and gods. While having your vacations in Bali you will surely encounter some Hindu festivals as I luckly did in Malaysia, as I had an impression that on this island they happen every single day. However, it is worth checking the calendar prior to your trip to plan seeing the biggest ones.

The theological foundation for the religion comes from Indian philosophy. However, indigenous beliefs and traditions blended and created rituals unique for Balinese culture. As the Balinese saying goes “The truth is one; the interpretation, multiple.”

In Balinese Hinduism nature is “power” and each element is subject to influence from spirits. Ancestor worship is a very important part of their beliefs and daily activities. You will see women walking around with a tray full of flowers and incenses, offering these to the spirits and ancestors. Balinese houses have a shrine for spirits and ancestors where they treat them every single day.

Arts and Balinese dance are inseparable from religion. Dances express a story of drama using the whole body. Telling stories through dance and drama was like watching and ancient theatre. Indeed, Balinese dance culture incorporates ancient Hindu traditions when the character fights demons and evil spirits.

There are two different sides of everything you see in Bali, the tangible side and the magical one. In Balinese culture there is no real distinction between the secular and the religious. Therefore, the supernatural is often a part of daily life activities.

As a visitor coming to Bali you probably won’t hear much about ‘black magic’ but be sure it exists. Many things have special energy such as directions, colour, number, syllables, temples. Locals are conscious of them all the time. I can highly recommend to stay on Couch surfing to experience that. When I went with a daughter of my host to the street market she was telling me about some of these every minute. Like, that bad energy comes when I touch someone on the street or never ever touch someone’s head or feet. Balinese tradition strongly dictates the way of their life.

Having menstruation in Bali

I stayed on Couch Surfing with one traditional Balinese family. They wanted to take me to the temple to see how it looks like during the celebration. They made me wear traditional clothes and we collected fresh flowers for offerings. When everything was ready, my host asked if I have a period. I paused for a moment, thinking of something widely inappropriate I could ask about his dick. I said: Yes, why?

Indeed, in Bali you can find the signs outside of temples restricting women from entering if menstruating, as they are considered spiritually unclean. Physically and mentally ill or unstable people would disturb the positive energy flow during the ceremony.

There is no north or south in Bali

It was very funny when I was staying with the local family. The host asked me to always go to the kitchen first, after I come into the yard. Due to their beliefs, bad energy we might bring from ouside will stay in the kitchen, and then we are ready to enter other rooms with clean energy. I asked why they had built the kitchen so far from the gate then? Here comes the answer.

Thinking that there are four geographical directions: north, south, east and west? This doesn’t apply in Bali! On the island the volcano determines 8 compass directions, which consist of four basic points: kaja, kangin, kelod and kauh. 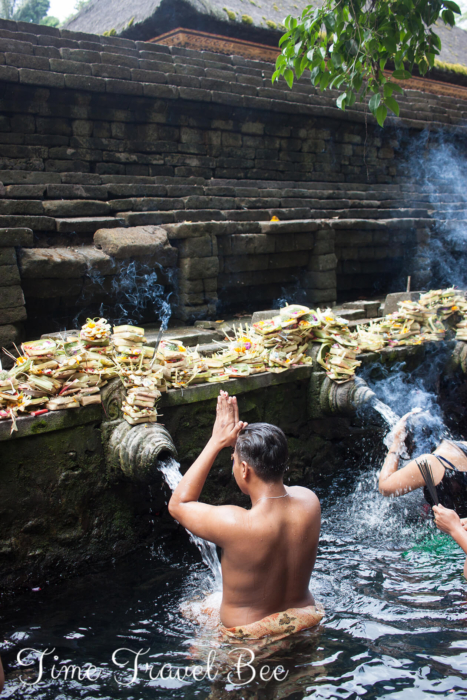 Everything is based on these compass directions, and you can see it in their daily life as well. Pay attention that villages are orientated kaja-kelod (the temples are in kaja end of the village, the cemetery at the kelod end). Same with the housoholds, where everyone sleeps with their heads towards less sacred orientation. Building where people sleep must be from the side of the volcano – north and kitchen and toilet on the opposite.

No matter where you go in Bali, you see colourful baskets full of flowers, food and incense. At every door, office, airport, crossroad, often even in the middle of the road. They were often object of my photos as Balinese people take a really good care of the details. Cute, little baskets will have fresh flowers, incenses and sometimes tiny cookie or candy for the spirits. How adorable! OK, candy was wrapped in a plastic paper, so modern offerings stop to be eco-friendly. I even saw some having cigarets!

Balinese make offerings to both gods and demons. The object of their religious practices is to maintain a balance between good and bad. An offering is supposed to be a kind of self-sacrifice: people spend lots of time and money making the offering.

Interesting fact is that offerings made to the higher aspects of god must be beautiful and put on above the ground. Those for the demons can be simpler and placed on the ground because the demons are greedy and will take pretty much anything.

Everyone is born with a debt

As we might believe that everyone is born as a blank page, in Balinese culture reality looks quite the opposite. The Balinese believe that people are born with three kinds of debts, which they must pay down throughout their lives. They owe lives to God, love and acts of devotion to their elders and the spirits of their ancestors and knowledge to the priestly class.

The ceremonies in Balinese culture perform the payment of these debts. By undergoing rites of passage, participating temple anniversaries and paying respect to elders both living and dead, Balinese people believe to be awarded when they pass away.

Balinese New Year according to the calendar in Bali falls in March (depending of the year). Thinking about this day in the western culture I imagine a party, celebrating and hangover. In Bali, however, it’s a Day of Silence. Everything is closed with no exceptions for tourism. Everything, including the only airport, hotels, restaurants, beaches. Tourists that day have to stay in the hotel, cannot go out for a walk or anywhere else. Electricity is very limited and mostly switched off as in this day without fire and light. No one works and goes out. It’s a moment for reflection, meditation, fasting from all the pleasures and entertainment.

If you are not confused yet about the Balinese culture and traditions, here it comes. In general, Balinese people name their children depending on the order they are born, and the names are the same for both males and females.

Respectively, the firstborn child is named Wayan, Putu or Gede, the second is named Made or Kadek, the third child goes by Nyoman or Komang, and the fourth is named Ketut. Ketut means “little banana” or “the outer edge of banana bunch.” This child is considered the “bonus” kid. If a family has more than four children, the cycle repeats itself, and the next ‘Wayan’ may be called Wayan Balik, which loosely translates to ‘another Wayan’.

Some Balinese people have names that denote their caste or clan. For example, people from the Wesya (aristocratic) caste might be named Gusti, Dewa or Desak, people from the Ksatria (kings and warriors) caste are often called Ngurah, Anak Agung or Tjokorda, and people from the highest priestly caste, the Brahmana, are often named Ida Bagus for men or Ida Ayu for women. Jero indicates that a person, usually a woman, has married into a higher caste.

Few names but no family name

Straw souvenirs and offerings materials on the street market in Bali.

Family names are not really used in Bali (same like in Iceland!), but it’s common to give a personal name as well. However, when people introduce each other, they usually do not use their personal names, but simply call themselves Made, Wayan, Ketut, etc.

Personal name often depicts the event which happened along with the birth. For example grandfather of my host had name Tutuk because when he was born the coconut fell down from the tree making the sound: tu tuk tu tuk. Nowadays, Balinese people tend to add modern names instead, such as Sarah or John according to their taste and choice.

I am not gonna mention confusion which comes with the nicknames created when there are so many Made’s and so on. What’s more, most Balinese people also give their children a second or third Hindu name that has a positive meaning. Examples include Suardika, which means ‘guiding light’, Setiawan (faithful), or Dewi (goddess). Sometimes Balinese people use this Hindu name or shorten it to create a nickname. For example, Budi might be short for Budiasa, Widi could be a shortening of Widiarta, and Nuri might be short for Nuriasih.

Finally, when using their full names, Balinese people also add a prefix to indicate gender. ‘I’ is for men and ‘Ni’ is for women, so I Wayan Darma Putra would be a first-born man, while Ni Anak Agung Rai would be a woman of the ksatria caste.

See my favorite place in Bali and spoil your taste buds with incredible vegetarian food. It’s a magical island with so many places to see around Bali. If you continue your trip to other islands of Indonesia, I invite you to have a look at the most spectacular volcanoes in Java island – Bromo and Merapi and interesting things to do around Yogyakarta. 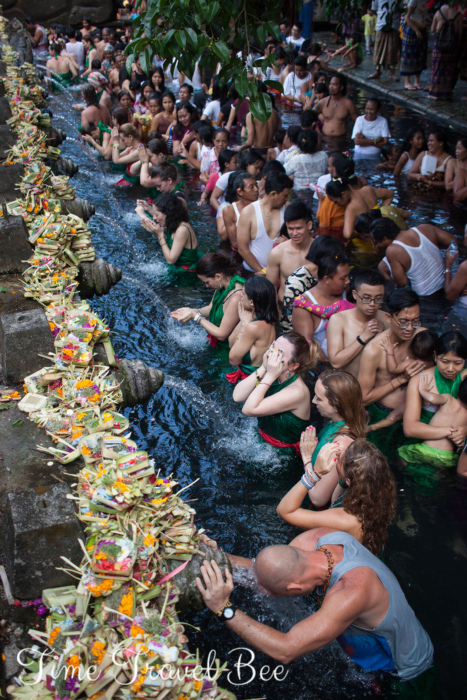 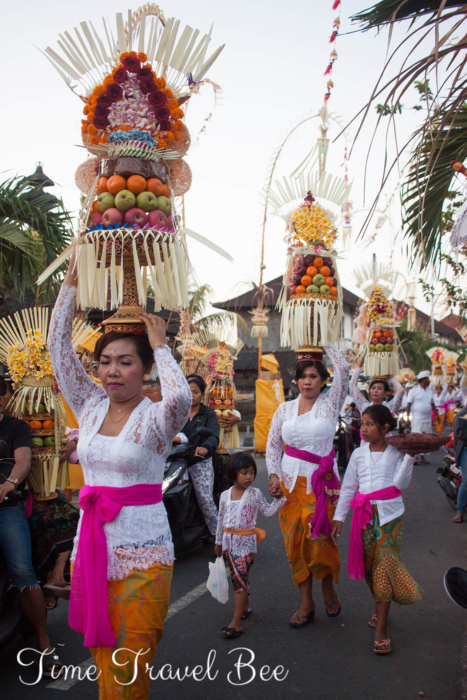