Home » Places » India » Thaipusam – the weirdest festival I have ever seen!

Explosion of colors, spicy piercing and mental dances on the streets – it was insane! Thaipusam is a Hindu festival, definitely the weirdest festival I have ever seen. I couldn’t believe all those people carry heavy items on attached to their skin, until I saw it with my own eyes. I went to one little square with massive piercing which was as shocking as the rest of the events. Let me show you what I have seen. 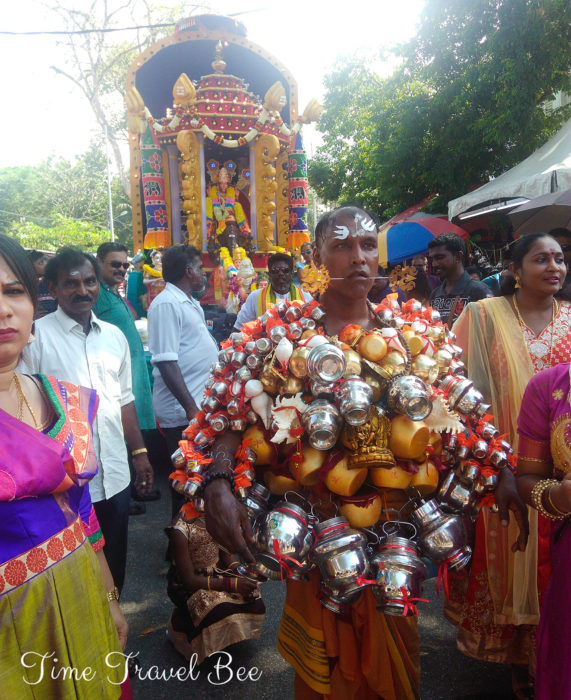 No joke. All these items are pinned directly to his skin and arrow goes through his mouth.

The Festival is celebrated during the full moon of the 10th month in the Hindu calendar. It is mainly observed in countries where there is a significant presence of Tamil community such as southern India, Sri Lanka, Malaysia, Mauritius, Singapore, South Africa and other places. That explains why I haven’t seen it in India, being there in the same period, few years ago – I was just not in the right regions. Glad I could see it in Penang, Malaysia and can advise this place to everyone.

Thaipusam is a combination of the name of the month, Thai, and the name of a star, Pusam, which is at its highest point during the festival. It commemorates the occasion when Parvati (the Hindu goddess of fertility, love, devotion, divine strength and power) gave Murugan (the universal granter of wishes) a spear – the vel – so he could vanquish the evil demon Soorapadman. So at Thaipusam devotees pray to Murugan to receive his grace and favours and to do act of penance.

First day – when coconuts juice was all over my body

On the first day, a pilgrimage procession takes place to bring the statue of Lord Murugan on a chariot led by kavadis (burdens) to the temple. Whilst the bulls are resting devotees pass trays laden with fruit, flowers and incense up to the priests on the chariot to get a blessing. Two decorated bulls pull the chariot and tons of coconuts are smashed in front of it. Why is that huge waste taking place, I asked. The answer is: to cleanse the road… I leave ancient rituals and old traditions with no comment. There were even labels on some of the coconuts for ownership purposes… Just after the chariot approached service cleaned the coconuts pills from the way. I was invited to contribute to the big mess and food waste, and smashed one coco with joy…

Me in front of a chariot where people leave their offerings and prayers.

On the second day devotees go through a physical endurance of being skewered and pierced on the back and front of their bodies. You ask why? It’s an act of penance, but different religions express it in different ways. Huge hooks on the back, some on the chest, arrows going through cheeks and tongue. Ropes attached to the hooks on the back were used to pull a friend, or a small wagon, behind them. Others will carry small milk pots pierced to their bodies by another hooks. I have never seen so much piercing in my whole life.

All the pierced men went through so much pain and looked like under delusion. Some people say they also fast for two weeks prior the holiday. That sounds like a way too much to be possible. On the other hand, if someone would tell me that guys skewer their bodies to bring milk to the temple I also wouldn’t believe, if I wouldn’t see it with my own eyes.

Anyway, when they got ready with painful body decorations, they could begin the way towards the temple with crazy dance and spinning. All accompanied with the scream “vel” – spear and loud drums. Streets looked mental!

Some of the men wear elaborate kavadi consisting of two semicircular pieces of wood or steel attached to a cross structure that can be balanced on their shoulders and usually connected to their bodies with hooks. They often have flowers and peacock feathers decorations. Some can weigh up to 30 kg! The most spectacular ones are up to two meters tall and attached to the devotee through 108 hooks pierced into the skin on the chest and back.

Thunderous loud music, singing, dancing and the beating of drums of devotional songs are the norm during this festival. Women were wearing their good saris, and everything looked so colourful and pretty. Upon reaching the temple, devotees will fulfil their vows, offer thanksgiving prayers and do penance as required.

Temple, where all devotees were heading, was few miles away from the starting point. I can’t imagine how all those pierced guys made it there. Moreover temple was on the top of the hill with 512 steps. All the way to the temple each of the devotees, man, woman or child, carry milk. Some have silver pot, special for this celebration, some simple box of milk from the supermarket. Once they reach the temple all the milk, which has been carried, ends up in the large containers. Locals say, that all those hectoliters of milk used to flow down the hill as a stream, but this tradition is no more cultivated. Cannot imagine this scene! On the way down from the temple some men and women shave their head and put yellow sulphurous paste on the scalp.

On the third day the chariots are pulled back the same way. Thanks God, all the devotees survived, all the pierced men had his piercing removed and hopefully all their wishes will come true.

Thank you Hindu tradition to bring me to this extremely colorful event out of this planet. It was weird, shocking but unforgettable experience. Now, that you know why and what happens during the festival, I invite you to watch the compilation of videos from Thaipusam and photo gallery. Don’t watch, if you are sensitive to this type of scenes.

Silver Chariot traveling all the way to the temple

Indian women are dressed in their good saris for Thaipusam 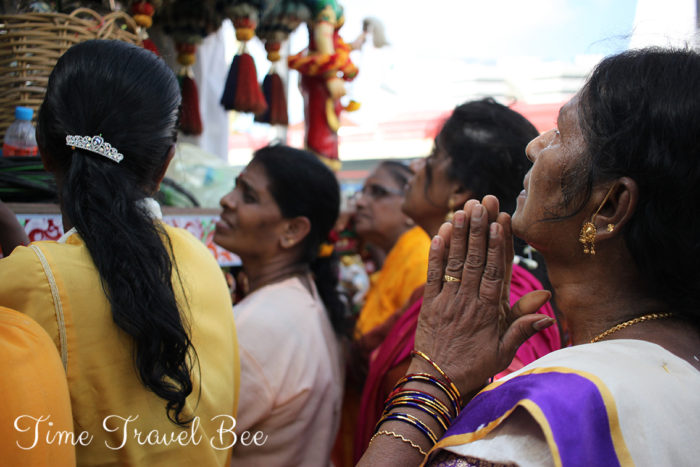 Pierced men dancing on the street 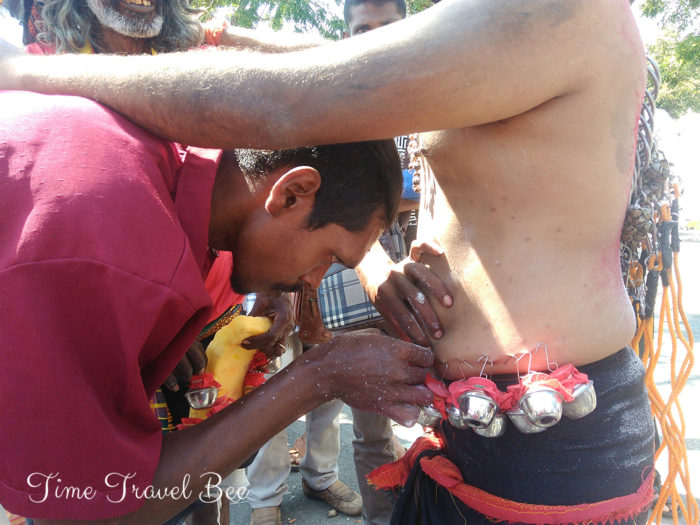 10 Best Things to Do in PenangWhat to expect when going for an Indian weddi...

39 thoughts on “Thaipusam – the weirdest festival I have ever seen!”