Home » Places » Algeria » Why you shouldn’t skip Tlemcen while in Algeria?

Tlemcen is one of the most historically important cities in Algeria. Tlemcen itinerary might seem a bit like walking down the streets in Andalusia, Spain as the architecture is very similar. Heritage of the period when it was one of the most significant points on the caravan way from Sahara to Europe, is simply beautiful. Today Tlemcen is not a big city, and its golden age passed a long time ago. Therefore, visitors of Algeria often skip it. In my opinion it’s worth at least one day trip from Oran in a discovery of Algerian history. First, let me introduce a little bit of the facts from the past. Later, I tell you what to see in Tlemcen and how to get there.

Why does Tlemcen have such an important heritage? 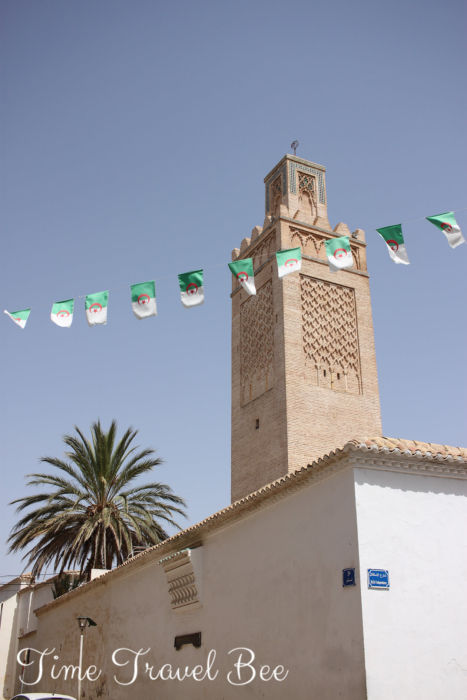 Before I start with the Tlemcen itinerary I would like to mention few facts from the history. In the early years Romans made here their military outpost and a city called Pomaria. It was an important diocese in the North Africa and center of a large Christian population for many centuries.

After, the city of Tlemcen was under the Berber kings rule. Back then, in the 8th century it started to

be an essential point on the trade route from Sahara to Europe. However, the golden age of Tlemcen started when it became a capital ofthe Kingdom of Tlemcen. It was a strategic place from the Golden Route to Sudan. Morover, housed a European trading center (funduk) which connected African and European merchants. Coveted by her Merinid neighbours in Fez, Tlemcen had to resist their attacks several times. And, under the reign of the Zianide Abu Said Othman, it had to defend itself against one of the longest sieges in human history – eight years.

During the Ottoman Empire rule city of Tlemcen started to loose it’s status and continued so under the French occupation.

What to see in Tlemcen?

When I was coming to Algeria and doing the research of the places worth visiting, I didn’t find out about Tlemcen. Thanks to the locals, who gave me the recommendation, because in my opinion Tlemcen should definitely be on the list of the most beautiful attractions in Algeria. I will show you what to see in Tlemcen and you will surely get tempted to see it with your own eyes.

The city center of Tlemcen

Let’s start Tlmecen itinerary from the city center. Walking around you will notice ruins of the Mechouar fortress. It was a residence of the Zianide princess, along with the palace, gardens and fountains. Can you imagine that? I bet you cannot, seeing the surroundings, unless you own some  remarkable imagination.

See the Great Mosque from 1136 and its courtyard with a fountain. Pay attention to mihrab – the niche which indicates direction of prayers to Mekka. It’s very richly decorated in Andalusian style and considered to be the most beautiful in Algeria. Another analogy with Andalusia is that this mosque is often compared to the Great Mosque in Cordoba, Spain.

The city center of Tlemcen is very compact. The best way to discover it, is to simply walk around the streets. You can enter few other mosques, look for the street markets, find madrasa – Islamic school, where now is archeological museum and simply get lost in the streets of the old medina. There is also Tlemcen Museum which depicts the history of the city. However, if you have just one day for Tlemcen, I advise you to don’t spend much time in the city center. All the other attractions which I am going to mention are much more interesting.

The most stunning was for me El Mechouar Palace as I felt back in Alhambra in Andalusia, Spain. And it would be, indeed, as great and as impressive, if the whole castle would survive. Unfortunately, El Mechouar Palace is just a part of the large castle which was a house of several kings. Wall reaching five meters was all around and soldiers standing on top of it. The castle even had different apartments for the king depending of the season. Cooling marble for summer and stone suite for winter. AC for rich people, right?

What’s more the summer suite had the secret alley to the mosque. This way, the king could come for the prayer unseen from the public. The alley could even accommodate horses. Could it be more luxury? Yes! The entire wall of the suites and palace was decorated with Islamic calligraphy, inscribing one sentence repeatedly which wrote “The splendor of God…the king that is in God” (“العزُّ القائم بالله.. الملك القائم بالل”). There are actually no better words which would describe the magnificence of the palace. Aside from the mosque, the castle contained hamam (turkish bath), houses and Islamic gardens. I cannot even imagine the splendor of the castle during its heyday.

Unfortunately, several rooms were destroyed during the Ottoman Empire rule. After 1843, French occupational forces took over the palace by force, destroying some other remaining parts of the palace in the process. When they turned it into a military barracks and a military hospital, historical heritage was nearly vanished.

Sad history of the royal castle, that’s true. Nowadays, the remaining palace is open for visitors, with a price of 100da. Inside, you will see a beautiful courtyard with water and several rooms around it.

On the opposite side of the palace, there is an interesting exhibition. Presentation of traditional clothes from all over Algeria. I was impressed how various the clothes can be withing one country. It reminded me how many different ethnic groups reside Algeria, where current borders were just established by the French. Talking about the clothes, I had a chance to participate in Algerian wedding in Oran. I saw lots of traditional costumes, incredibly beautiful dresses and shiny jewelleries. What an interesting event it was! Traditional dances, henna ceremony, Algerian traditional food and music. Real explosion of senses! 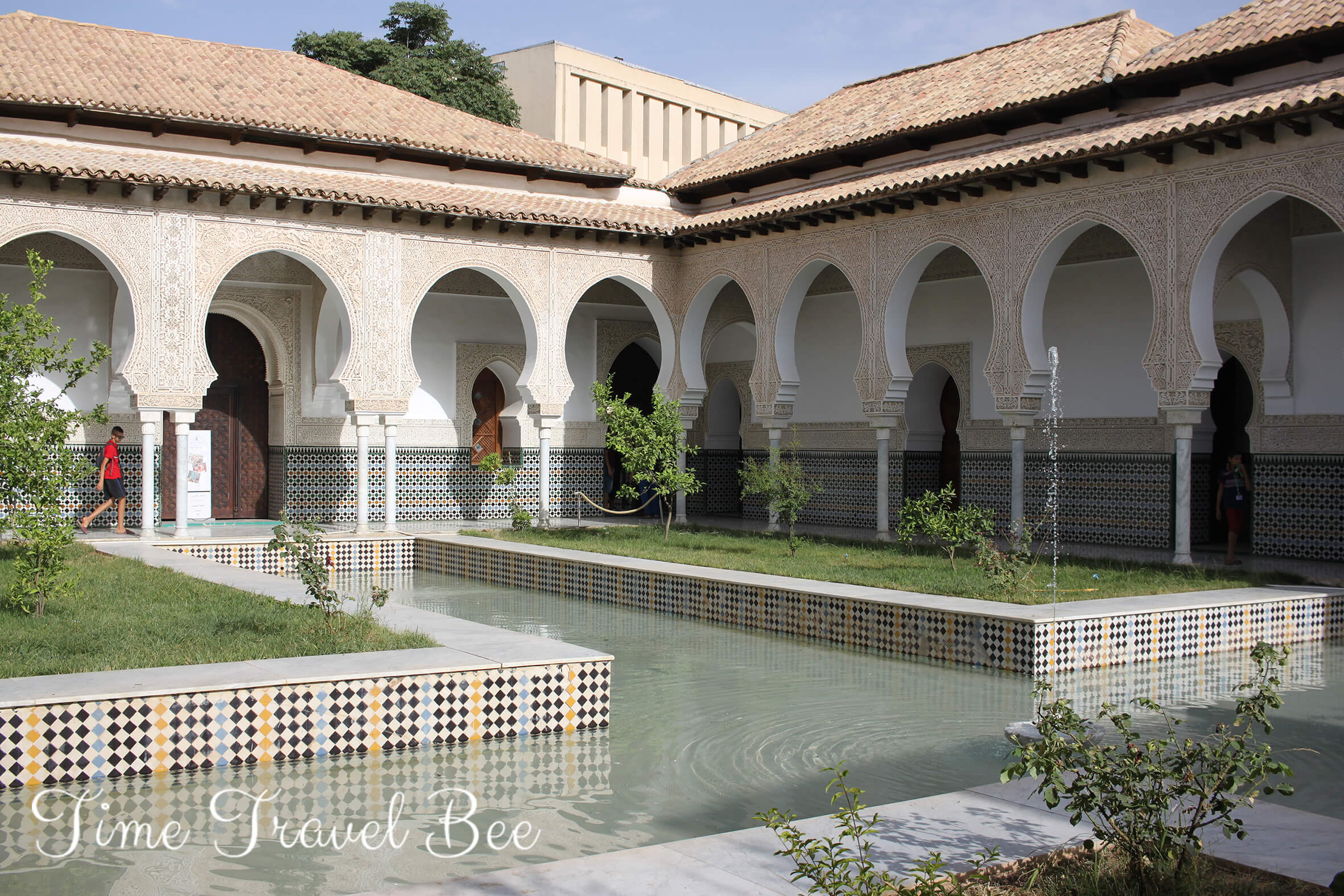 Mansourah (meaning “The Victorious” in Arabic) and is a name of the city back during the Marinid dynasty period. Nowadays it’s a name of the mosque ruins with and impressive minaret still standing since the very beginning of the XIV-th centrury. The great wall surrounding the city of Mansourah is now, just a remain. It used to have 4000m in length with 80 towers around 101ha city.

You can see Agadir mosque which is an interesting transformation of Roman ruins into the mosque. The lower section of the minaret was build using finely cut Roman stone. Some of them still carrying the Roman inscriptions… Just after the minaret you can see the oldest remaining city gate called Bab El Akba.

Tlemcen itinerary will finish with a complex of buildings on the outskirts of Tlemcen. The neighbourhood with little houses and kids playing around leads to the beautiful gate. Complex includes Sidi Boumediene’s mosque and tomb as well as Islamic school and ruins of the palace with hamam. Sidi Boumediene was a saint and an influential “Islamic mysticism” master. His mausoleum is a place of huge spiritual significance for Algerians. You can enter to the mausoleum and see men praying around and reciting Koran.

Take a walk to the ruins of the palace underneath the mosque – just after the entrance through the gate turn left. Down the stairs you will see the turkish bath – hamam.

The doorway to the mosque is wonderful: stairs leading to the huge door and decorative walls. The minaret of the Sidi Boumediene is particular. Square based minaret with bricks arcatures in a different way from each side. This construction you can see only in Tlemcen, Oran and Andalusia (Spain) as all of them were built in the same period.

I really liked madrasa – the islamic school building. The courtyard with little fountain and classroom with the high ceiling with a stunning paintings. Colorful mosaic on the floor describes the landscape of Algeria: green for the coast, black for the mountains and yellowish for the desert.

Despite it’s about 1.6km from the city centre, is  absolutely must-see in Tlemsen. The complex in on the hill above Tlemcen, therefore you can see all the area from the viewpoint.

That’s not all! If you continue the road towards Sidi Bel Abbes, you will enter beautiful area of gorge. You can stop near El Ourit waterfalls or even jump into the water as lots of youngsters do.

Going few more kilometres will take you to mazing Beni Add Caves. More about caves and other places to visit around Oran in a separate article:

Check out what to see around Tlemcen and Oran!

How to get to Tlemcen?

Tlemcen is only 20 km from the border of Morocco. Even though it’s a border area, it’s of the safe parts of Algeria. Remember, however, that the border with Morocco is closed. Getting to Tlemcen is easy. You can take 2 hours buses from Oran for 300da. Moving in between attractions in Tlemcen and around will be possible only by taxi or better Yassir. Yassir is an mobile app, Algerian equivalent to Uber. It’s much more convenient for a tourist than a regular taxi, as it will allow you to save on transportation while you travel.

Planning to visit Algiers? I have 2 days itinerary in Algiers ready for you as well as the map of the Kasbah of Algiers. Don’t forget to tell me how it was!

What to see in Algeria? Highlights of the Nor...
Area of Bromo off the beaten pathWalking around ancient ruins in Timgad - my t...

13 thoughts on “Why you shouldn’t skip Tlemcen while in Algeria?”